(FOX 9) - Some minor improvements can be seen on the latest drought monitor in much of western Minnesota with the most improvement in the southwest.

Many areas from Worthington to Marshall to Montevideo have seen the drought conditions improve by a full category. The areas experiencing a severe drought or worse statewide are down about 6% from last week as we have chipped away at the drought for the third straight week. 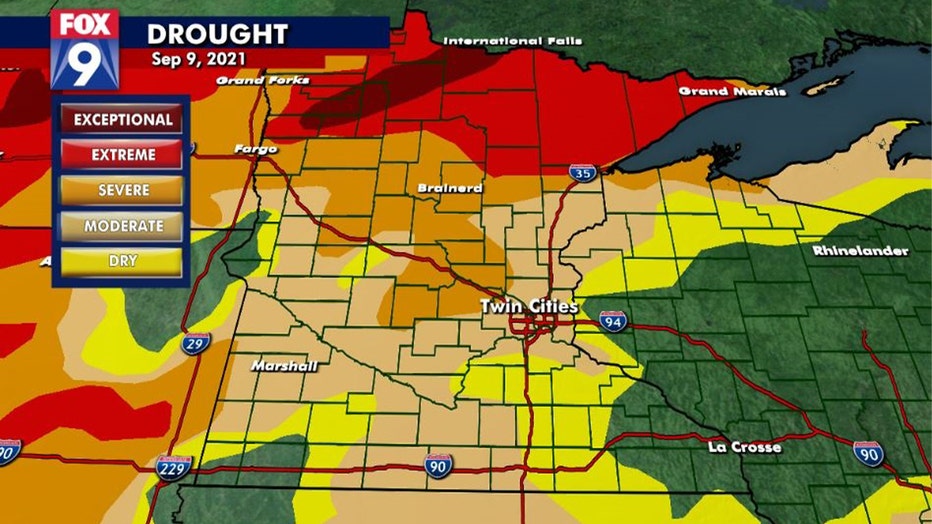 Despite our recent improvement in our dry conditions, and some green returning to our lawns, we are far from out of the woods and have a long way to go before ending our drought.

Much of northern Minnesota remains in the two highest drought categories with near record dry conditions. Many spots in central and southern Minnesota are still flirting with severe drought conditions, including much of the Twin Cities metro.

While we have seen some beneficial rains over the last couple of weeks, our dry stretch this week could extend through much of next week that could lead to deteriorating conditions yet again.

To get out of a drought, you need CONSISTENT above average rainfall. This means you need week after week after week of light to moderate rains totaling more than you would typically get in an average year. For the Twin Cities, that would spell more than an inch of rain per week through much of September and more than three quarters of an inch through October.

As the summer comes to an end, it’s time for farmers around Minnesota to harvest their crop. But after a tough drought, farmers aren’t seeing much life in their livelihood.

For northern Minnesota though, it's just too little too late. Barring anything extraordinary, the dry soil conditions will last all the way into at least the spring of next year. Once the ground freezes, moisture can no longer get in or out until the spring thaw. Now that we're into September, there just isn't enough time for the extreme drought zones to recover before the ground frost develops by late in the fall.

READ NEXT: Drought likely to dull fall colors this year

While the wonderfully pleasant and quiet stretch of weather has been nice, we need to enter a cool and wet pattern soon to get some soil recharge before the winter cold begins.

Questions about the drought? The FOX 9 Weather Team has the answers.

Download the FOX 9 Weather app to stay up to date on the latest weather and drought-related news, as well as forecasts to see when we'll get rain next. Download it for Android or Apple.