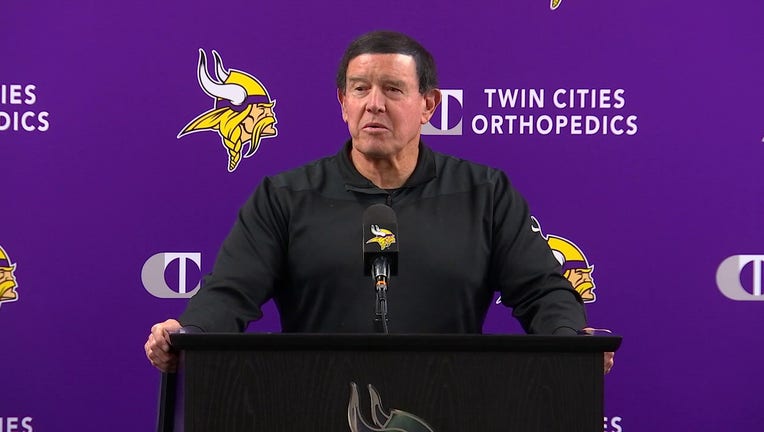 Mike Zimmer hired Dom Capers as a senior defensive assistant to join the Minnesota Vikings for the 2020 season.

EAGAN - Mike Zimmer is 63 years old and entering his 27th season as a coach in the NFL. He likes to do things his way, but he’s never been afraid to bring experience onto the coaching staff to make the Minnesota Vikings better.

Last year, Zimmer brought in Gary Kubiak to be an offensive advisor. The result? Improving from No. 30 to the No. 6 rushing offense in the NFL, and finishing sixth in scoring. This off-season, he made a call to 69-year-old Dom Capers, who will serve the Vikings as a senior defensive assistant this season after having a similar role with the Jacksonville Jaguars last season. He’ll be an “idea guy.”

“Part of it was Dom has been doing this for a long time. He’s always had really good ideas in the pressure game defensively. I just wanted another idea guy who had ways of doing things better than we have in the past,” Zimmer said Tuesday.

Capers admitted Tuesday he was a little surprised to get the phone call. He made the decision to leave 75-degree weather and come to Minnesota, where the snow isn’t done falling, and we’re getting sub-zero temperatures to end the week.

“I was excited about it because I’ve got so much respect for Mike and what he’s been able to do here with this defense. Not only here, but what he did at Cincinnati with their defenses, with Dallas, there’s a reason why every place he’s been, they’ve had outstanding defenses,” Capers said.

Zimmer is already familiar with Capers, having spent five seasons looking across the sidelines at least twice a year as Capers led the Green Bay Packers’ defense. Capers was in Green Bay from 2009-17, and Zimmer came to the Vikings in 2014.

Capers has been an NFL coach for 32 years, and a defensive coordinator for 25 years. He’s also been a head coach for the Carolina Panthers and Houston Texans. He’ll be a mentor to co-defensive coordinators Adam Zimmer and Andre Patterson, who are sharing the job after the departure of George Edwards.

Patterson had an immediate answer on Tuesday when asked what Capers will bring to the Vikings.

“A lot of knowledge, he’s been in this league a long time. He’s seen a lot, and to have a voice in the room like that for us to give us different ideas, I think is outstanding,” Patterson said. “I think it was very, very smart of Mike to look to do something like that.”

The Vikings finished 14th in total defense last year, allowing a little over 341 yards per game. They finished sixth in points allowed, at 18.9 per game. They had one of the top safeties in the NFL, Anthony Harris, who finished the season with six interceptions.

They could return a group along the defensive line that includes Danielle Hunter (14.5 sacks), Everson Griffen (8 sacks) and Linval Joseph. They’ll have a pair of veteran linebackers in Anthony Barr and Eric Kendricks, who led the Vikings in tackles and was named First Team All-Pro in 2019. The Vikings finished with 48 sacks last season.

“I’ve known Mike and followed his defenses, I’ve been able to watch the talent that the Vikings have had and the way they play, their style of defense. I love playing that style of defense, it’s a tough, aggressive, team-style defense,” Capers said.

Zimmer said after the season one of the things he wrote down as a priority was to bring in another defensive mind with experience in several areas. Enter Capers, who has coached at virtually every level of defense in more than 32 years in football. He specialized with the Packers in the ability to put pressure on quarterbacks.

“He’s always been a guy that has been very innovative in the pressure package of his defenses,” Zimmer said.

One of the things that appealed most to Capers was working for a defensive-minded head coach. Zimmer has been a defensive coach his entire career, including 14 seasons as an NFL defensive coordinator between Dallas and Cincinnati before coming to the Vikings in 2014.