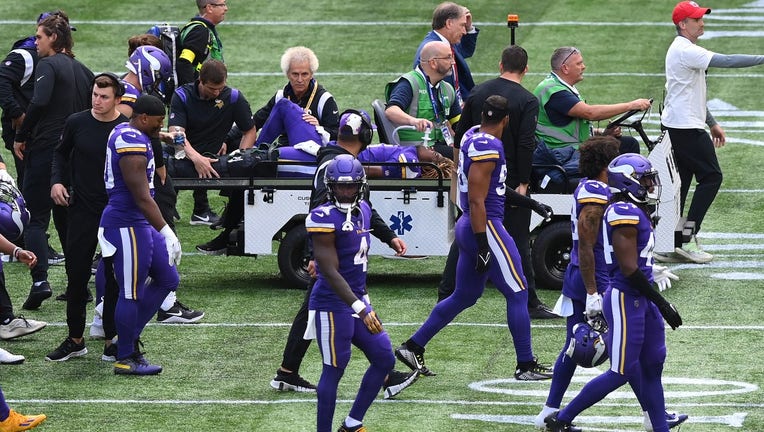 Lewis Cine #6 of the Minnesota Vikings is stretchered from the field after an injury during the NFL match between Minnesota Vikings and New Orleans Saints at Tottenham Hotspur Stadium on October 02, 2022 in London, England.  ((Photo by Justin Setterfield/Getty Images))

MINNEAPOLIS - The Minnesota Vikings are back home from a 28-25 win over the New Orleans Saints on Sunday at Tottenham Hotspur, but rookie safety Lewis Cine remains hospitalized in London.

Cine, the Vikings’ 2022 first round draft pick out of Georgia, suffered a significant lower left leg injury during the first quarter of Sunday’s game. He was running back on a punt to block for Jalen Reagor when we went to the ground in significant pain, grabbing near his left ankle.

Sunday night on Vikings Postgame Tonight, Jim Rich and Rich Gannon break down some of the key plays in the Vikings 28-25 win over the Saints in London.

Cine was immediately carted off and taken to a London hospital. Team officials say he underwent a successful preparatory procedure in advance of a surgery planned for Tuesday. A member of the Vikings’ medical team stayed in London with Cine to help him through the initial recovery process.

"Lewis will remain in London to continue his initial recovery process before returning to Minnesota at the appropriate time. A member of the Vikings medical staff will also stay in London until Lewis returns. Head Coach Kevin O’Connell and members of the Vikings organization have been in constant communication with Lewis, who is in great spirits," Vikings officials said in a statement on Monday.

Team officials say Cine will return to Minnesota when they deem it appropriate. Vikings coach Kevin O'Connell confirmed to reporters on Monday Cine suffered a compound fracture of his lower left leg. O'Connell says he spoke with Cine for about 20 minutes on the phone after the team returned to Minnesota early Monday morning.

Cine had primarily been playing on special teams, but was just starting to get defensive snaps.

O'Connell was asked if the team is confident Cine will get back on the field at some point. He said their focus right now is on getting through Tuesday's surgery, and getting him back safely to Minnesota.- That was message to Cine on the phone.

"That’s a tough question right now. Although we had to leave and come home, Lew, we’re still right there with you. The good news is he’s going to receive great care. Everything moving forward is about Lew and day by day, knowing we’re right there with him as he makes his way back to hopefully a full recovery," O'Connell said. "We’re going to do everything in our power, ultimately it’s going to be about that road to recovery."