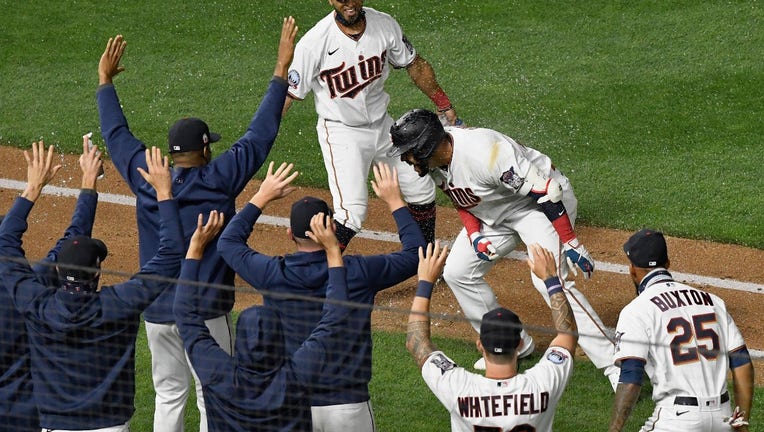 The Minnesota Twins congratulate Nelson Cruz #23 on a walk-off double against the Pittsburgh Pirates during the ninth inning of the game at Target Field on August 3, 2020 in Minneapolis, Minnesota. The Twins defeated the Pirates 5-4. ((Photo by Hannah Foslien/Getty Images))

MINNEAPOLIS - One of the biggest questions amid Major League Baseball and the Covid-19 pandemic entering a shortened season was how teams would handle celebratory walk-off victories.

We found out Monday night for the Minnesota Twins after they beat the Pittsburgh Pirates 5-4 at Target Field. With runners and second and third and one out, Nelson Cruz sent a 400-foot single to right center, scoring Jorge Polanco for the game-winner.

But as Polanco scored and Cruz rounded first, there was no hog pile, no Gatorade bath and no hugs. Instead, fake high-fives from a distance, dancing along the first base line and even spraying hand sanitizer on Cruz.

Max Kepler, who had three hits in Monday night’s win, said after the game Rocco Baldelli told the team as Cruz was up there couldn’t be any physical contact in a walk-off celebration. Kepler called it “awkward,” but it’s better than not having baseball at all.

The Twins improved to 7-2 with the win, and have a two-game lead over the Indians in the American League Central Division. They face the Pirates Tuesday afternoon to finish an eight-game home stand at Target Field. A win would put them at 7-1 for the stretch.