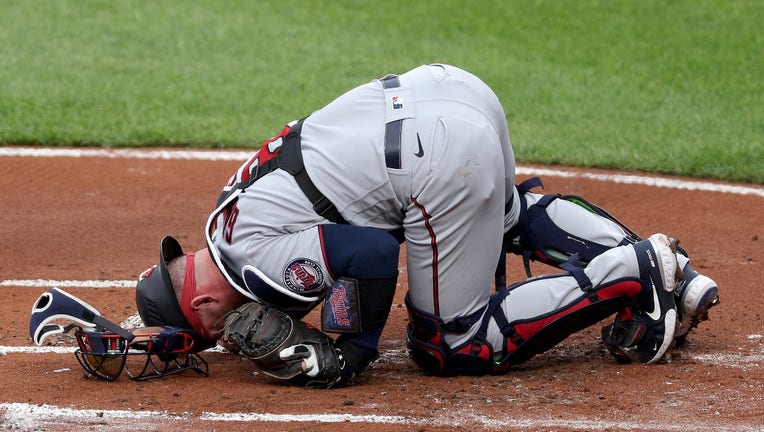 Catcher Mitch Garver #8 of the Minnesota Twins stays on the ground after being injured and leaving the game in the first inning against the Baltimore Orioles at Oriole Park at Camden Yards on June 01, 2021 in Baltimore, Maryland.  ((Photo by Rob Carr/Getty Images))

MINNEAPOLIS - The Minnesota Twins lost to the Baltimore Orioles 7-4 last night to drop to 22-32 on the season, and catcher Mitch Garver had to spend most of the night in a Maryland hospital.

Just four pitches into the bottom of the first, Garver took a foul tip off his groin area. He was on the ground in substantial pain for several minutes before eventually leaving the game. Garver posted to his Instagram story Tuesday night that he had to have surgery for the groin injury.

"Quick update: I did leave the game last night with a ‘groin contusion’ and had to go to the emergency room for an ultrasound. The imaging showed I needed surgery. A successful surgery was performed and I stayed the night in the hospital. I’m recovering well – thanks for all the messages and texts."

His departure meant Ben Rortvedt, who was a late scratch from the starting lineup with a quad injury, had to step in and catch the rest of the game. Garver has played in 41 games this season, hitting .224 with eight homers, eight doubles and 17 RBI.

Twins manager Rocco Baldelli said after the loss it’s unlikely Garver will be catching again any time soon. The injuries continue to pile up for the Twins, as utility player Willians Astudillo had to play in the outfield Tuesday with Byron Buxton and Max Kepler still sidelined.