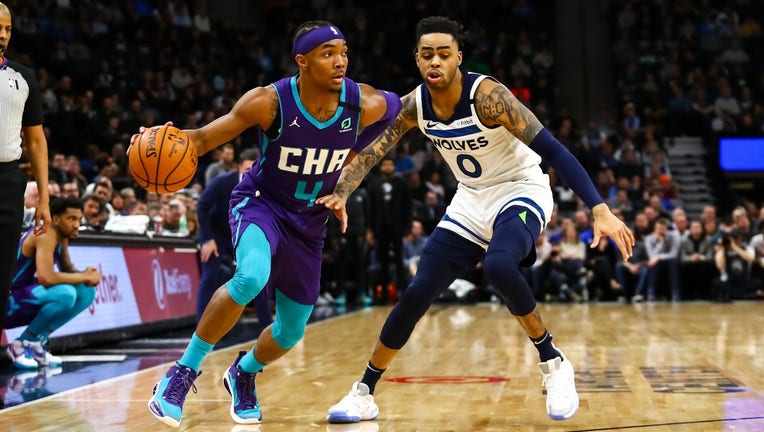 Devonte' Graham #4 of the Charlotte Hornets drives to the basket against D'Angelo Russell #0 of the Minnesota Timberwolves in the second quarter of the game at Target Center on February 12, 2020 in Minneapolis, Minnesota. ( (Photo by David Berding/Getty Images) )

MINNEAPOLIS - There was an anticipation in the air as Minnesota Timberwolves fans arrived to Target Center Wednesday night.

In their final game before the NBA All-Star break, newly-acquired guard D’Angelo Russell played in front of a nearly full house. He scored 26 points, had 11 assists and grabbed six rebounds. The Wolves led by as many as 18 early on, 16 at the half and 13 in the third quarter before losing to the Charlotte Hornets 115-108.

It was announced before the game that forward Karl-Anthony Towns would not play after having an MRI done on a left wrist injury. His only role Wednesday was that of a cheerleader, with a brace on that wrist.

Wolves fans will have to wait until at least after the All-Star break to see the team’s two stars play together at Target Center. They were excited to be there, the only thing they didn’t get was the payoff.

“The crowd was amazing. We’re trying to build something here with our group, definitely young guys, but we’re definitely using the crowd, that energy to continue to build on I think. The more we show how hard we’re going to play in front of them and try to protect home court, the more we’ll continue to keep it loud and rocking,” Russell said.

One of the biggest ovations of the night came for a player no longer with the Timberwolves. Robert Covington was back in town, presumably to take care of some personal matters during the All-Star break. He sat with front office head Gersson Rosas, the man who traded him and seven other players last week in one of the biggest roster shuffles in franchise history.

The issues Wednesday on the court came down to a revamped roster that hasn’t played together a lot yet, and simple math. The Wolves shot 7-of-21 from the perimeter in the first half and scored 66 points. They were out-scored 31-21 in the third quarter, and shot just 16-of-52 (30.7 percent) in the second half.

The Hornets shot 41 percent from the perimeter and put up 65 points in the second half.

The Wolves may have a new look, but the result is still a work in progress. The Wolves are 1-2 since their roster shake-up, and only once in the three games have Towns and Russell played together due to injuries.

Until they can get more time on the court together and build a chemistry, they’ll take more lumps before coming out on the other side.

“There’s going to be a lot of adjustment. Change is hard, and when you have a wholesale change where it’s almost a new roster, these guys are going to do everything they can to speed up the process as players and as coaches and as an organization, we’ll do that,” Wolves coach Ryan Saunders said.

With Towns out, Malik Beasley led the Wolves with 28 points on 11-of-25 shooting, including 5-of-14 from the perimeter. Russell had his 26, Juancho Hernangomez added 16 points and 12 rebounds and Naz Reid scored 12 off the bench.

Devonte Graham led the Hornets with 28 points, including shooting 5-of-11 from the perimeter. Miles Bridges added 20 points, and Malik Monk scored 25 points off the bench. What’s more troubling for the Wolves is Charlotte entered the game just 17-36 on the season and having gone just 2-8 in its last 10 games.

The new reality for the Wolves is this rebuild will take time, and it’s the last thing fans want to hear. They traded away eight players last week, and brought in seven others, led by Russell, that the front office feels are a better fit for the way the organization wants to play.

Minnesota heads to the All-Star break 16-37, 14th in the Western Conference and going 1-9 in its last 10 games. Players and fans alike will need to exercise patience after blowing their second-largest lead of the season Wednesday night.

“It’s just learning, it’s a process but I hate losing so it’s tough for me right now,” Beasley said.

It’s tough for everyone, and Rosas said last week it won’t be easy. Nothing good comes easily.