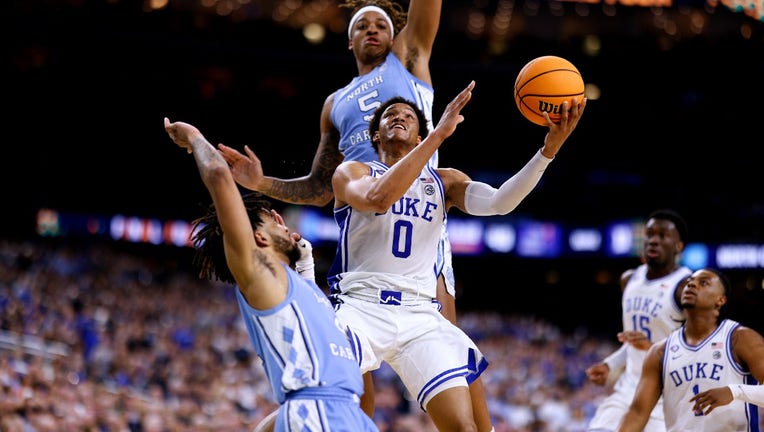 Wendell Moore Jr. #0 of the Duke Blue Devils goes to the basket against Armando Bacot #5 and RJ Davis #4 of the North Carolina Tar Heels during the 2022 NCAA Men's Basketball Tournament Final Four semifinal at Caesars Superdome on April 2, 2022 in Ne ((Photo by Lance King/Getty Images))

MINNEAPOLIS - Tim Connelly was a busy man as the new front office head in his first NBA Draft with the Minnesota Timberwolves Thursday night.

They ended up making four picks, didn’t trade a certain veteran point guard and ended up with a pair of first round selections. Connelly made it very clear in speaking to reporters after the draft what their vision was as they try to shape the future of the organization: The character of their draft picks has to match the talent.

The Minnesota Timberwolves had a busy night in the NBA Draft, trading for Auburn center Walker Kessler and Duke guard Wendell Moore Jr.

"Who know if this was a good or great night, but we felt like we added some pieces that fit who we are culturally and make us a better team," Connelly said. "The guys we got are all big-time pros and they’re about the right things. Any time you bring that type of professional and that type of competitor in this building, I think we got better."

So how did the Timberwolves do? Here are takeaways.

TIMBERWOLVES TRADE 19, GET WALKER KESSLER AT 22

The Timberwolves picked Wake Forest guard Jake LaRavia at No. 19, but it became clear quickly they weren’t keeping him. They traded the pick to the Memphis Grizzlies, along with future second round picks, to get the Nos. 22 and 29 selections. With the No. 22 pick, they took Auburn center Walker Kessler.

At 7-1 and 245 pounds, Kessler led the nation last season with 4.6 blocks per game and was the National Defensive Player of the Year. He also averaged 11.4 points and 8.1 rebounds per game. He gives the Timberwolves a true center, and the chance to move Karl-Anthony Towns to power forward.

The Timberwolves traded the No. 29 pick to move up to the No. 26 spot, and selected Duke guard Wendell Moore Jr. He was one of four Duke players taken in the first round Thursday night, and five players total. Moore played three seasons for the Blue Devils, starting all 39 games last season and averaging 13.4 points, 5.3 rebounds, 4.4 rebounds and 1.4 steals per game in Duke’s run to the Final Four. He also played about 34 minutes per game, and shot better than 41 percent from the perimeter.

He'll bring a durable, veteran scoring presence in the backcourt.

There was plenty of speculation leading into the NBA Draft that the Timberwolves might use the night to shop D’Angelo Russell. He’s due north of $31 million next season, and had to be benched during Game 6 of an elimination game loss to the Grizzlies. If not for Russell’s body of work during the season, the Timberwolves might not have been a playoff team to begin with. He also had a big night in the play-in win over the Clippers, with Towns in foul trouble.

The draft is over, and Russell is still with the Timberwolves.

"I think D-Lo was huge to the success of this team last year," Connelly said.

The rush after the conclusion of the draft is to put together a roster of undrafted players that can compete in the NBA Summer League. The Timberwolves signed former Champlin Park star Theo John Thursday night. John played at Marquette before spending his final college season at Duke. He’s now reunited with former high school teammate McKinley Wright.

Connelly wanted to bring in quality players who are also high-character people. But the last thing he wants is to put unnecessary pressure on incoming rookies to contribute immediately. After all, the Timberwolves didn’t have a lottery pick this year after winning 46 regular season games, and making the playoffs. The current roster centers around Towns, Anthony Edwards and Russell.

"I’m not going to put unfair expectations on what they’re going to do on the court. Most rookies don’t make huge impacts, but when you add the type of people we added, the organization got better," Connelly said.

While it felt like a productive night for the Timberwolves, it will take a few years to know if that’s ultimately the case.