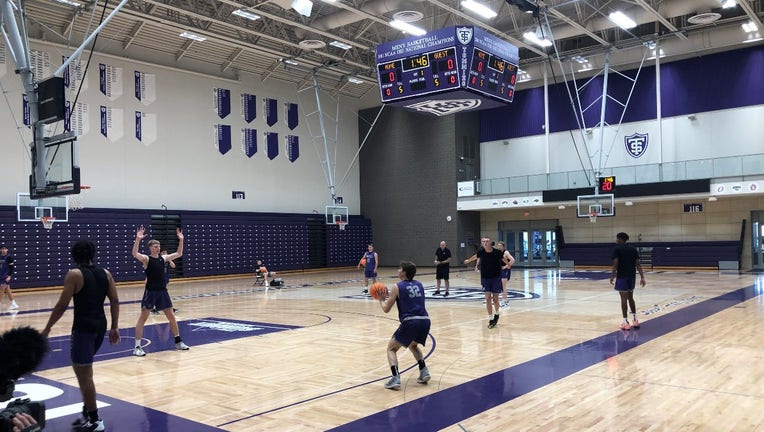 The St. Thomas men's basketball team, entering its second season in Division I, is in the middle of summer workouts.

MINNEAPOLIS - The St. Thomas men’s basketball team went 10-20 in its first season in Division I, including a 4-14 mark in the Summit League.

On the surface, the Tommies took some expected lumps after decades of winning MIAC titles and making NCAA Tournament runs. But in stepping up two levels, they were competitive in a majority of those 30 games last season, and did so with a group of mostly Division III players. John Tauer, entering his 12th season as St. Thomas head coach, feels his program is on the verge of something big as it enters its second season in Division I.

Coming off a 10-win debut season in Division I, the St. Thomas men's basketball team has a mix of veterans, transfers and a talented freshmen class heading into the 2022-23 season.

"It was sort of one of those years that will never happen again," Tauer said. "The experiences that they shared last year have just made them all more veteran. It was an incredible journey last year, all the things that we learned and it’s honor to be in the Summit League. We’re ecstatic to go into Year two and try and build something really, really incredible."

St. Thomas is in the middle of a seven-week summer program. Tauer gets four hours per week with his team for on-court workouts. They get another four hours in the weight room, usually in 60-minute sessions over four days.

The pace was hectic and competitive, as has been tradition since Tauer took over the head job for Steve Fritz 11 years ago. The Tommies have plenty to be excited about as they head into their second season, despite not being eligible for the NCAA Tournament until the 2025-26 season. They’re in a five-year probationary period as a result of their leap to Division I.

The Tommies return top scorer Riley Miller, an Eden Prairie native and Benilde-St. Margaret’s standout who wasn’t ranked in the top-200 players in Minnesota as a freshman. He averaged 15.4 points per game last season, and shot 40.4 percent from the perimeter. Parker Bjorklund, a 6-6 graduate student out of Chaska, is back after averaging 12.6 points and 6.3 rebounds per game last season.

Despite winning only 10 games last year, Miller said it might be the most fun he’s had playing.

"Looking back on it, we were really happy with the way things went. We were competitive in almost every game, we felt we had a chance to win almost every game," Miller said. "Going into the season, no expectations and I think looking at my four years, it’s the lowest win total I’ve had. But it was the most fun, by far."

Much of the early talk around the Tommies is their highly-touted freshman class, featuring Minnesota prep standouts Ahjany Lee of Byron and Totino-Grace, Carter Bjerke of Wayzata and Kendall Blue of East Ridge. The fourth member of the class as Andrew Rohde, who led Brookfield Central in Wisconsin to his team’s state championship game last year.

There will be growing pains with that many new faces, but the hope is it’s just the start of something special.

"You look at those guys and what four of them meant on the local basketball scene in our state, and then Andrew Rohde leading his team to the state finals last year, we think those guys are going to be a huge part of the foundation moving forward," Tauer said. "This is not a sprint, this is a marathon. Phil Esten, our athletic director, talks about building this the right way. This group of freshmen, we really think, can be a group that over the next several years can take St. Thomas in Division I to really great places."

The summer for the Tommies is about skill development and getting bigger. They’ll get time off in August and September before the real season starts, but now is a time to gel on the basketball court, and away from it.

"To me it’s just a wonderful time because we don’t have a game coming up in a week or even six weeks. Right now it’s all about growth individually and collectively," Tauer said.