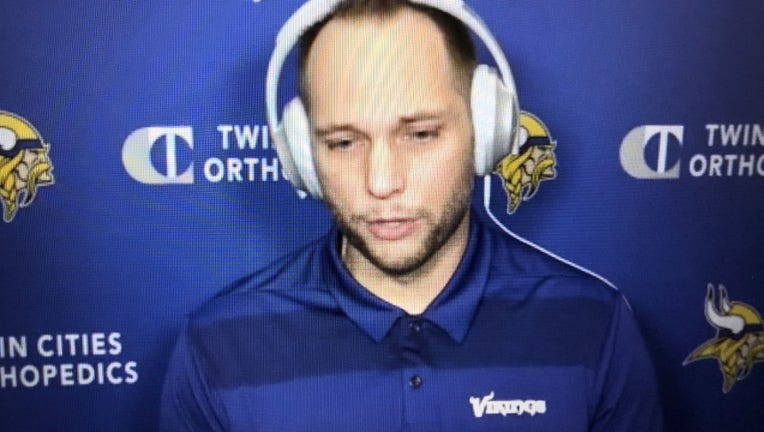 Ryan Ficken was recently named the Vikings special teams coordinator for the 2021 season.

MINNEAPOLIS - The Minnesota Vikings had one of the worst special teams units in the NFL in 2020, so Mike Zimmer felt he needed to make a change.

After three seasons, the contract of Marwan Maalouf was not renewed. Maalouf replaced Mike Priefer, who left the Vikings to take the same job with the Cleveland Browns. In steps Ryan Ficken, who is entering is 15th season with Minnesota and has been an assistant special teams coach since 2013.

There’s plenty to address, and he’s ready for the challenge.

"It’s the head coach’s vision, and we’re just going to be an extension to find the best opportunity to go ahead and help our team win football games. We’ve got to play complimentary football," Ficken said.

There’s not much that bothers Zimmer more than poor special teams play, especially in losses. The Vikings struggled in every phase of special teams throughout the season.

They gave up a kick return for a touchdown against Cordarrelle Patterson. K.J. Osborn got benched as the primary punt returner multiple times during the season. Chad Beebe had a muffed punt, the Vikings let two punts of their own get blocked in the same game and they cut long snapper Austin Cutting during the season.

Kris Boyd got penalized for an illegal shift after the Vikings had converted a fake punt for what would've been a first down.

"We kind of know where some of the bones are buried, but the evaluation process never ends. We’re always doing that year-round, every day and trying to find a way to improve this football team," Ficken said.

Perhaps the greatest offseason special teams question comes at kicker. Dan Bailey made 36 of 37 extra points before missing seven kicks in a two-game stretch. Bailey was 0-for-3 on field goals and missed an extra point at Tampa Bay. That’s after missing two extra points and a field goal against Jacksonville, leading to questions on if Bailey would be cut.

Bailey made just 15 field goals on the season, and 68 percent of his field goals. He was 37-of-43 on extra points. The Vikings finished 30th of 32 teams in the NFL in field goal percentage, 31st in field goals made and 21st in extra points made. It’s enough that the team reportedly signed Greg Joseph to compete with Bailey, though the job is Bailey’s to lose at this point.

"I have a really good relationship with Dan Bailey. I’m very optimistic in what he can, do, and I believe in his skill sets, I think he’s one of the top kickers out there. Very excited and fortunate that we have him on the Minnesota Vikings roster," Ficken said.

"We’ve got to play that complimentary football," Ficken said.