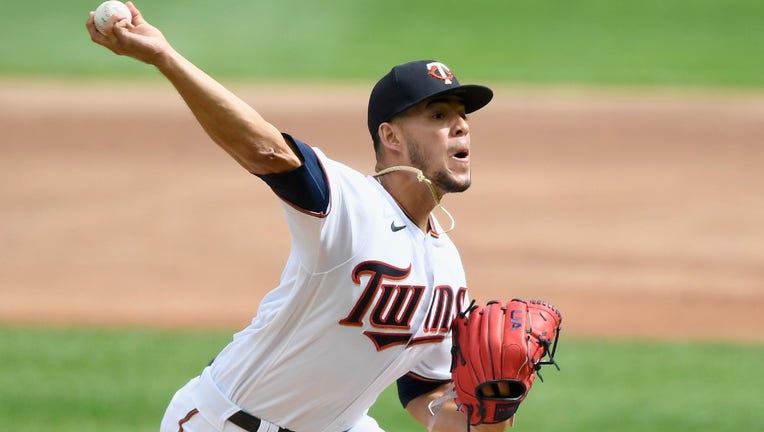 Jose Berrios #17 of the Minnesota Twins delivers a pitch against the Seattle Mariners during the first inning of the home opening game at Target Field on April 8, 2021 in Minneapolis, Minnesota. ((Photo by Hannah Foslien/Getty Images))

MINNEAPOLIS - The Minnesota Twins will be back on the field in Oakland on Tuesday for a doubleheader after having their last three games postponed due to COVID-19 issues.

The Twins had no new positive COVID-19 cases after a round of testing on Monday, and were cleared to fly to Oakland Monday night to resume playing. With Andrelton Simmons already on the team’s COVID-19 list, the team headed west and lost 10-3 to the Los Angeles Angels of Anaheim last Friday night.

The Twins then had games Saturday and Sunday postponed after two additional players and a staff member tested positive, forcing the team to undergo contact tracing. Outfielder Kyle Garlick had a positive COVID-19 test, and team officials did not name the other player. That player will at some point have to be placed on the team’s COVID-19 list.

The Twins gave several players and team staff the option to get COVID-19 vaccines the day after they beat the Seattle Mariners on April 8, with it being a scheduled off day for the team. Simmons, who tested positive last week, was not one to get a vaccine for personal reasons. Teams who get 85 percent of players and staff vaccinated, per MLB rules, can adhere to loosened COVID-19 protocols.

Players who test positive must isolate for 10 days.

Monday’s series opener at Oakland was postponed to allow for the Twins to conduct additional testing. They are scheduled to play a doubleheader of two seven-inning games against the Athletics starting at 5:30 p.m. Tuesday. Matt Shoemaker will start Game 1, and Jose Berrios will get Game 2. Kenta Maeda will start Wednesday’s series finale.

The Twins are also scheduled to host the Pittsburgh Pirates for a three-game series starting Friday at Target Field, and there’s a chance that series could get altered. Just blocks away from the ballpark, former Minneapolis police officer Derek Chauvin is on trial for the Memorial Day 2020 death of George Floyd, and the case was handed to the jury for deliberations Monday afternoon.

Demonstrators took to the streets of downtown Minneapolis Monday night, with tension and anticipation high as we wait for a verdict. Last week, the Minnesota Wild and Timberwolves each postponed and altered game times after Daunte Wright was fatally shot by police in Brooklyn Center, resulting in several nights of protests in the Twin Cities.

The series could also be impacted if Minneapolis city officials issue a curfew in anticipation of civil unrest once a verdict is reached.