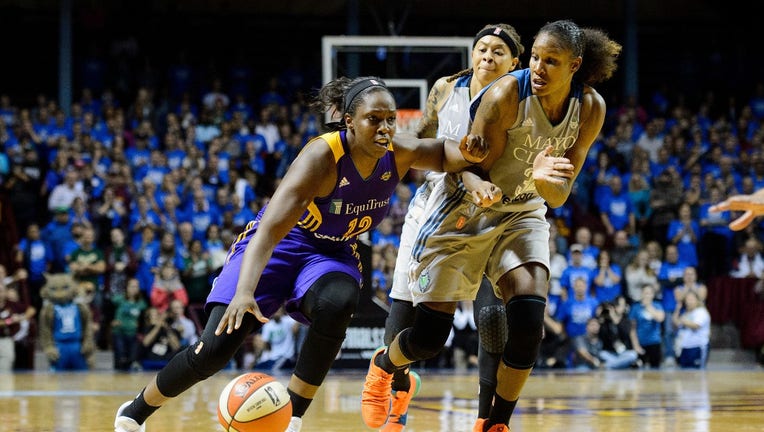 Chelsea Gray #12 of the Los Angeles Sparks drives to the basket against Seimone Augustus #33 and Rebekkah Brunson #32 of the Minnesota Lynx during the fourth quarter of Game Two of the WNBA Finals on September 26, 2017 at Williams in Minneapolis, Min ((Photo by Hannah Foslien/Getty Images))

MINNEAPOLIS - The Minnesota Lynx announced on Tuesday details for the jersey retirements of former players Seimone Augustus and Rebekkah Brunson.

They will be the second and third Lynx jerseys in franchise history to be retired, after Lindsay Whalen’s No. 13.

Minnesota Lynx on a mission for 2022

The Lynx wrapped up their media day today in Minneapolis as they prepare for the 2022 season.

Her jersey retirement will include a video tribute, on-court program with remarks from Augustus and a banner unveiling her No. 33 jersey. Players and coaches will also wear special warm-ups in honor of Augustus, and fans can get pictures taken with an Augustus photo standee. Fans in attendance will also get an Augustus commemorative poster.

The Lynx will retire Brunson’s No. 32 in a ceremony at 5:25 p.m. on Sunday, July 3 before Minnesota hosts the Las Vegas Aces. Brunson is a five-time WNBA champion and current assistant coach with the Lynx who also does commentary work with the Timberwolves for Bally Sports North.

Brunson played in 261 career games with the Lynx, scoring 2, 463 career points, getting 267 steals, 174 blocked shots and 56 double-doubles. She’s the first player in WNBA history to win five titles, including four with the Lynx. Her jersey retirement will feature a video tribute on her basketball career, as well as community activism work to advance social justice and LGBTQ+ rights.

Brunson will have remarks, and players and coaches will also wear a special warm-up T-shirt. Fans in attendance will also get a commemorative shirt.

Brunson holds the franchise-high in all three rebounding categories. She has 688 career offensive rebounds, 1,470 defensive and 2,158 total rebounds.