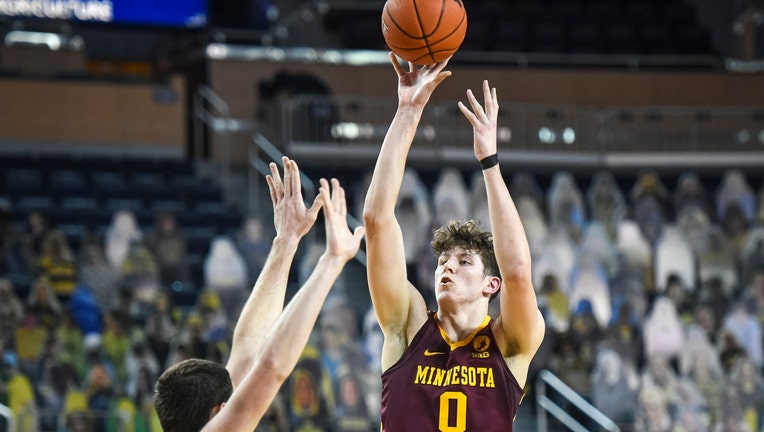 Liam Robbins #0 of the Minnesota Golden Gophers shoots the ball over Hunter Dickinson #1 of the Michigan Wolverines during the first quarter at Crisler Arena on January 06, 2021 in Ann Arbor, Michigan. (Nic Antaya / Getty Images)

MINNEAPOLIS - The University of Minnesota men’s basketball team has had a week to look at what went wrong after its first home loss of the 2020-21 season.

Richard Pitino had plenty to address, and plenty of time to get confidence back in his players after one of their worst offensive performances of the season in a 63-49 loss to Maryland. The numbers aren’t pretty. The 49 points are a season-low. They shot 30 percent from the field, 5-of-23 (21.7 percent) from the perimeter and a season-worst 16-of-25 from the free-throw line.

The Gophers made 14 shots on the day, and committed 12 turnovers. Marcus Carr made eight of those 14 shots, the rest of the team was a combined 6-of-32.

"That game we just lost total confidence from the outside," Gophers coach Richard Pitino said. "We were just way too easy to guard versus Maryland. If you give up 63 points in our league, you should win that game. Just offensively we were so bad."

So how do they fix it? The answer seems pretty simple: Get back to work.

The last win for the No. 21-ranked Gophers came Jan. 13 against then No. 7-ranked Michigan. It was 13 days ago, and Pitino joked it feels like it’s been two years. Minnesota had a game at Nebraska four days after that postponed due to COVID-19 issues with the Cornhuskers, then put up a clunker against Maryland.

The Gophers travel to Purdue Saturday for their fourth game in 21 days, and Mackey Arena is typically one of the toughest road venues in the Big Ten. It’ll be a different atmosphere with no fans, but the Boilermakers remain 6-1 on their home court this season. They’re coming off their first home loss to the Wolverines.

With the outside shots not falling, the Gophers have to find other ways to score. Liam Robbins, who was named to the top 10 list Friday for the Kareem Abdul Jabbar Center of the Year Award, says the Gophers are looking to get their confidence back. It’s similar to how they lost at Iowa 86-71, then bounced back with a win over Michigan.

The Gophers are 0-4 away from Williams Arena this season. There's no better way to build confidence than getting a road win in the Big Ten.

"I think the Maryland game, you could see that we were kind of deflated just off of not seeing open shots go in. Coach always says just do the work. We’ve had practice every day this week, we’ve done the work so we should see a different result tomorrow," Robbins said.

Pitino says it comes down to making more shots. That comes down to moving the ball and attacking the basket. The Gophers didn’t do a lot of either against Maryland. They missed shots, and lacked energy.

"I think Maryland had energy because they were beating us. We didn’t have as much energy because we were having a bad day," Pitino said. "We couldn’t make a shot. We can get the pompoms out all we want, but we just couldn’t get any momentum. We didn’t have great energy, but we couldn’t make a shot. That had a lot to do with it. Maryland was energetic and enthusiastic because they were taking it to us."

Saturday’s game is critical for the Gophers. Minnesota opened the Big Ten season with eight straight games against top-25 opponents, the toughest stretch in the history of the program.

While the rest of the schedule eases up in terms of ranked teams, Pitino will say it until he’s blue in the face. There are no easy games, home or road, in the Big Ten. So put a couple wins together, and everything changes.

"When you’re looking at our league, you can legitimately say that about 90 percent of our league believes they’re in the hunt for an NCAA Tournament bid," Pitino said. "It’s all about the quality of who you beat. You can have a good week and all the sudden you flip the script. When you have 90 percent of the league that truly believes that they’re going to go to the NCAA Tournament, that’s what makes it so competitive. I don’t think any other leagues have that."