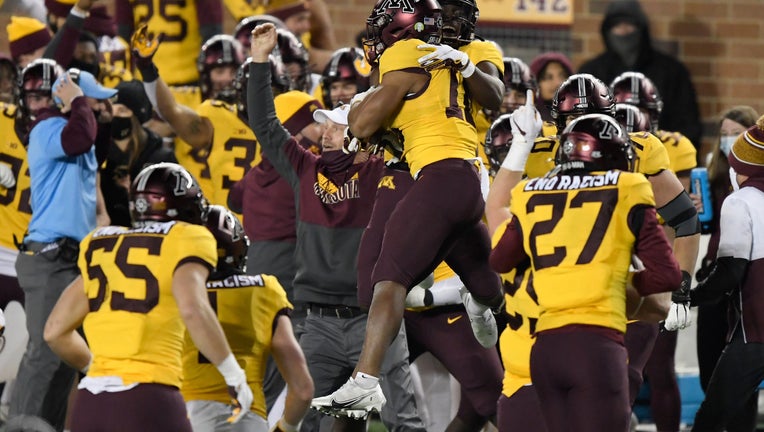 MINNEAPOLIS, MINNESOTA - NOVEMBER 20: The Minnesota Golden Gophers celebrate an interception by teammate Josh Aune #29 against the Purdue Boilermakers during the fourth quarter of the game at TCF Bank Stadium on November 20, 2020 in Minneapolis, Minn (Hannah Foslien/Getty Images / Getty Images)

MINNEAPOLIS - The University of Minnesota football team announced Friday it will officially open the 2021 season against Ohio State on Thursday, Sept. 2, at TCF Bank Stadium.

The Big Ten Network announced the 2021 football schedule on Friday, altered due to the COVID-19 pandemic. League officials originally put the 2021 schedule together four years ago, before there were any concerns with COVID-19. There were no changes for Big Ten teams among conference opponents, but some dates and locations were changed.

The biggest change for the Gophers is hosting rival Wisconsin to end the regular season. Minnesota was originally set to face the Badgers for Paul Bunyan's Axe on Oct. 9, and face Nebraska on Black Friday. The Gophers will now host the Badgers Nov. 27, and host Nebraska Oct. 16.

The Gophers’ schedule is as follows:

The Gophers start with three of their first four games at home. Their only road non-conference game is Week 3 at Colorado. Their Big Ten crossover game against the East Division is at Indiana on Nov. 20.