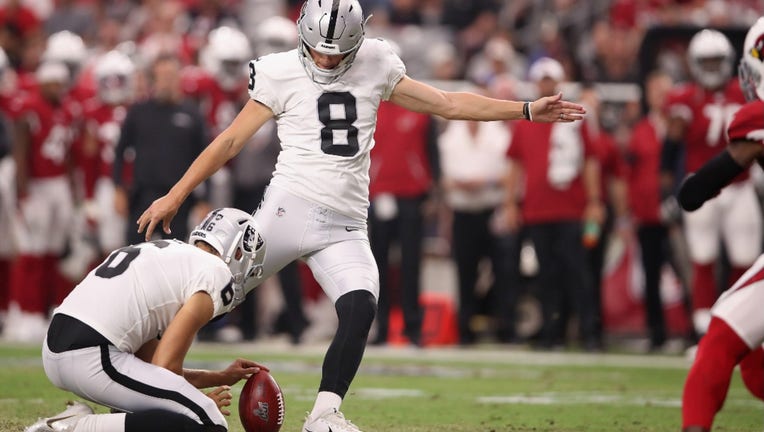 EAGAN - After a short-lived time with the Minnesota Vikings, Daniel Carlson has found a new home on the West Coast.

The Vikings have a history with kickers, and most of it is negative. Gary Anderson was perfect in the 1998-99 season, until the one kick that mattered the most in the NFC title game. His only miss of the season cost the Vikings a chance to go to the Super Bowl, and sent Vikings’ fans home in tears.

Fast forward to Blair Walsh, whose miss from 27 yards out against the Seattle Seahawks in the NFC Playoffs at TCF Bank Stadium in frigid conditions became the new “wide left.” He faced heavy scrutiny after the January 2016 playoff miss, and was cut nine weeks into the following regular season.

In those nine games, Walsh was 12-of-16 on field goals and missed four extra point attempts.

The Vikings drafted Daniel Carlson with a fifth-round pick last season, and Mike Zimmer’s patience grew thin quickly. Carlson missed three field goals, two in overtime, at Green Bay in a 29-29 tie in Week 2. Make one of the two overtime kicks, and the Vikings are a playoff team last year.

The Vikings signed Dan Bailey in free agency, one of the most accurate kickers in NFL history. Even he’s had his adventures in Vikings purple. In 14 games last season, he was 30-of-31 on extra points, but just 4-of-9 on field goals from 40 to 49 yards out.

But for Carlson, a fresh start with the Oakland Raiders appears to be what he needed to get his confidence back. In 12 games with the Raiders last year, Carlson was a perfect 18-of-18 on extra points and 16-of-17 on field goals. He made all three tries from 50 or more yards out, and his only miss was from between 40-49 yards out.

“He’s been an iceman for us. He won a game at the buzzer last year, beating Arizona. He’s been very, very high percentage in terms of making kicks. Just really been a huge addition to our team,” Raiders coach Jon Gruden said. “Sometimes a change of scenery just works out. We’re excited to have him.”

Zimmer doesn’t have an answer for why Carlson struggled in Minnesota. He just hopes Sunday’s game at U.S. Bank Stadium doesn’t come down to his former kicker on the field with the Raiders.

“All I know is he’s done well, I’m glad he’s done well. I hope he doesn’t do well this week, but I wish him success in the future,” Zimmer said.

It also can’t be forgotten that the Vikings traded a fifth-round pick this year to the Baltimore Ravens for specialist Kaare Vedvik. He struggled with kicking in Training Camp and didn’t survive the final roster cuts with the Vikings. He signed with the New York Jets before Week 1, and promptly missed a field goal and an extra point in their 17-16 loss to the Buffalo Bills.

Meanwhile, Carlson has been a perfect 4-of-4 on extra points this season through two games. He’s also made two field goals between 20 and 29 yards.

Gruden and the Raiders did their homework on Carlson before giving him a chance, and it’s paid off. Carlson might have put pressure on himself knowing the Vikings’ history with their kickers, but he’s got to be feeling good now.

“Sometimes it's a little bit much and you don't make your kicks, but a lot of these kickers are on their second, third, fourth, fifth teams if you really look carefully, so that's just the way pro football is, but sometimes just a change of scenery can help a guy excel and hopefully he continues to do well here,” Gruden said. “He's been impressive for us.”

Now the Vikings hope that change of scenery doesn’t result in Carlson handing his former team their second loss in three games to start a 2019 season that’s filled with high expectations.