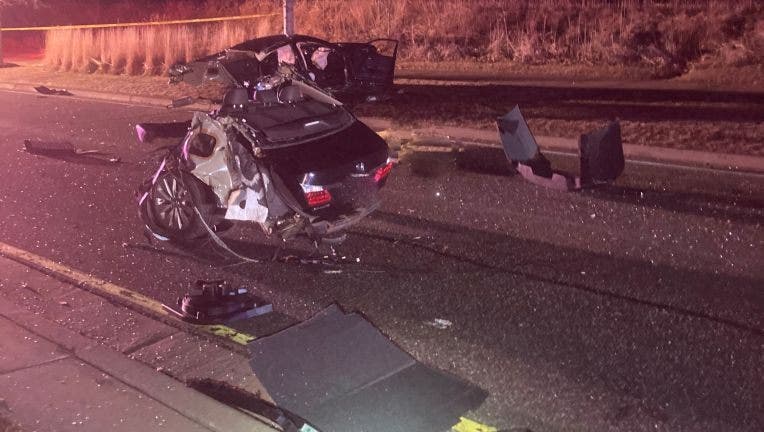 A crash in Woodbury, Minnesota left one teenager dead and four others injured. Now, residents want to change the deadly stretch of road.

WOODBURY, Minn. (FOX 9) - A community effort is underway in Woodbury to fix a road where a crash killed a 17-year-old and hurt four other teens.

Residents presented a petition to the Woodbury City Council Wednesday night to change the roadway at Settler’s Ridge Parkway near Sundance Way.

A community effort is underway in Woodbury to fix a road where a crash killed a 17-year-old and hurt four other teens.

The petition seeks to change the stretch of road people drive fast on to "get some air," they said. While the issue wasn’t on the agenda, three people spoke about the deadly accident from March 13.

17-year-old Garrett Bumgarner was killed and four other teenagers were injured. One of them is still in the hospital.

A local teacher in Woodbury started the petition to get a roundabout placed along the road where it happened. He hopes it will slow traffic.

So far, the petition has garnered more than 3,900 signatures in one week. He spoke at Wednesday’s meeting as well as the stepmother of a victim of the crash that is still in the hospital. They urged the council to act.

The crash split a vehicle with five people inside in half. One of them is dead Sunday and four others are injured.

"Immediately prioritize and change this fatal intersection before another life is lost," said Lisa Mears, the stepmother. "I ask you to prioritize this as though it was you that received that call in the middle of the night."

"I’m here to present it to the city council and ask them to do some research or look into it and see what would be beneficial to make that intersection a lot more safer," said Andrew Tretter, who started the petition.

The Woodbury Police Department, who is leading the investigation, and the State Patrol, who is assisting with the crash reconstruction, both say the March 13 crash is still being investigated and they will wait until it’s finished to determine if any sort of charges would be filed.