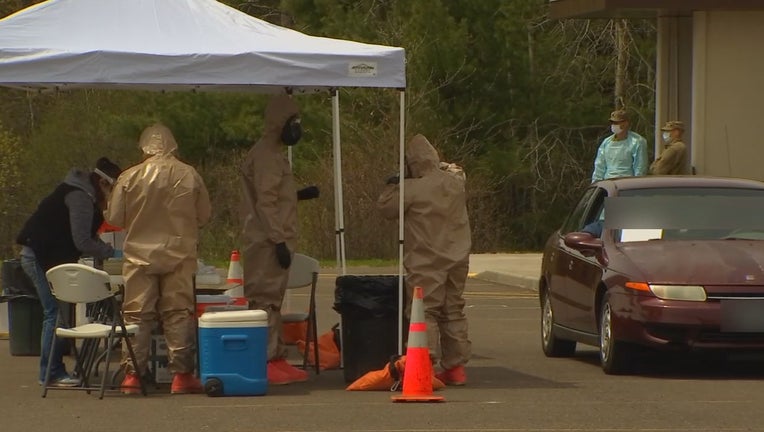 SIREN, Wis. (FOX 9) - Residents worried about COVID-19 pulled into a mobile, drive-thru testing site set up by the National Guard in the heart of Wisconsin’s cabin country.

“I’ve had a persistent cough and, combined with my age, had some concerns whether something was going on,” one man said.

Wisconsin residents line up for COVID-19 tests as the debate over safer at home order continues.

The Guard teamed up with public health agencies in a rural corner of the state, attempting to bring as much free testing to the masses. After testing more than 200 patients in Barron County over the last couple days, the operation moved to Siren, in Burnett County.

“Anything no cost is a good thing," said Laura Sauve, Public Health Program Manager for Barron County. "It increases access to people who may have a high deductible or don’t have health insurance. So, it allows those people to obtain a test. That’s an important piece especially for a rural community."

As testing continued throughout the day, the battle over the governor’s safer at home order played out virtually in real-time.

The Republican legislature has filed a lawsuit against the Evers administration for the statewide order - meant to fight the spread of the coronavirus pandemic - that was extended through May 26. Their side contends it is unnecessarily crippling the economy and is illegal in its scope.

Arguments were held and broadcast online over Zoom, with the governor’s legal team arguing the order is saving lives.

Meanwhile, those at the testing site said they are keeping a close eye on a potential ruling, which is expected soon.