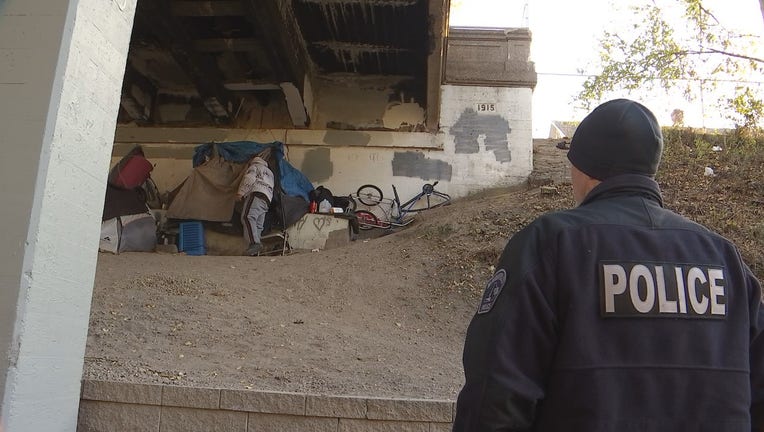 A member of Minneapolis Police Department's new homeless initiative does a routine check-in on a person experiencing homelessness along the Midtown Greenway.

MINNEAPOLIS (FOX 9) - With thousands experiencing homelessness on any given night in Minnesota, two Minneapolis Police officers have focused solely on building relationships with the unsheltered.

In October, Natasha Smith and her friend were experiencing homelessness in Minneapolis.

Two Minneapolis Police Officers worked on a new initiative this winter to connect and reconnect with people experiencing homelessness.

“Really, you don’t really know what tomorrow is going to bring, so you always trying to make sure you’re OK for today,” Smith said.

She and her friend look out for each other and have their own stories about how they ended up there.

“Just to think two, three years ago I had my own apartment and I was looking for a job and had my daughter and had everything I needed and all the sudden, wrong crowd, wrong people and I feel like I just got sucked in and went down the wrong hole,” she said.

Smith is not alone on the streets, however. Sgt. Dave O’Conner is one of the officers tasked with checking in on the women along the Midtown Greenway Bike Path. It’s something he does every day no matter the season.

“Our goal is to find people where they are, make sure they are connected with the services they need, check their physical welfare and make sure they’re stable,” said O’Connor, of Minneapolis Police Department’s Homeless and Vulnerable Populations Initiative.

The initiative started in 2018 by Chief Medaria Arradondo as a way to connect with the homeless, give them a voice and show compassion.

“I think our police department and just society as a whole is kind of recognizing that homelessness isn’t a crime,” said O’Connor.

It’s an initiative that’s grown from once officer to two. O’Connor joined in the fall and is already thinking ahead.

“Come winter here, we’re going to play another role because weather becomes a bigger factor and making sure they’re healthy, they have what they need and can stay warm enough,” he said.

Winter is on the minds of those living on the streets, too.

“It’s getting cold now and I do, I worry about my mom getting cold, you know?” said Clifford Thomas Machen, who was experiencing homelessness in October.

The 18-year-old has been living with his mother on the streets and has struggled with addiction, but is hoping for something better.

“My hope for the future is to get my mom off the streets and make sure I can put my mom in a safe home instead of running around like this all the time,” Machen said.

As fall moved closer to winter in November, there was an urgency in the air. Lt. Grant Snyder hit the streets that day after piloting the Homeless Outreach Initiative with MPD more than two years ago.

He was running it solo until O’Connor recently came on board. It’s now a growing team that is helping address a growing concern.

Numbers back those observations, too. A count of unsheltered in Hennepin County was done by the nonprofit St. Stephen’s in July. It found 732 people were unsheltered on a single night, up from 523 a year before.

In 2018, Wilder Research found a majority of the homeless population in the state had a chronic mental or physical health condition. It’s something outreach workers are seeing firsthand.

“It’s a combination of things,” said Columbia Castro, who is experiencing homelessness. “Family, stress, addiction to drugs, things of that nature. We’re getting better at figuring out what we need to do in order to stay out of homelessness.”

“We show up every day,” Snyder said. “That’s the biggest thing we can do is we track people we keep in touch with them, we show up with what they need.”

The MPD also makes sure to follow through on that promise, even on the holidays.

On Christmas, Snyder and his wife Melanie spent the afternoon handing out meals from Rock Bottom Brewery and checking in on those they know in an effort to bring some cheer to those who need it most.

As winter settled in, so did the Minnesota cold. People continued to live outdoors into February.

“A big thing I’ve been doing this winter is resourcing people with the gear they need. Gloves, hats, hand warmers, pre-packaged food in some cases,” said O’Connor.

The work continues by the MPD and other local outreach partners to meet people where they are and help where they can.

“They’re reaching out and it helps out a lot,” said Kat Yanez, who is experiencing homelessness. “And it’s not just handling us a pamphlet and saying, here, come to my office.”

Sometimes, the officers find, we all have more in common than we may think.

“Homelessness is a really complex issue,” O’Connor said. “There are no easy answers. I think it’s important to remember we’re dealing with people that are dealing with a lot of challenges and this is a society we need to recognize that and come up with compassionate solutions to working with them.”

Snyder and O’Connor also work very closely with other community partners working to help the unsheltered as well. St. Stephens, AICDC, Youth Link and Healthcare for the Homeless are some of the others.

The organizations depend on donations. Snyder’s wife also runs a nonprofit called Involve MN that raises money to buy food and supplies for the homeless.