The Twin Cities are home to a vibrant community of artists and that has never been more apparent than after the death of George Floyd.

ST. PAUL, Minn. (FOX 9) - The Twin Cities are home to a vibrant community of artists and that has never been more apparent than after the death of George Floyd.

Now, there’s an effort underway to save the stunning works of art created in the wake of that tragic moment.

It can be found on boarded up buildings around the Twin Cities that turned into impromptu art galleries. Artists saw the plywood boards covering broken doors and windows as blank canvases to express their grief, anger and frustration that many were feeling at the time.

As the portraits of George Floyd and shows of support for Black Lives Matter come down, there’s a grassroots effort to give these temporary works of art a permanent home. 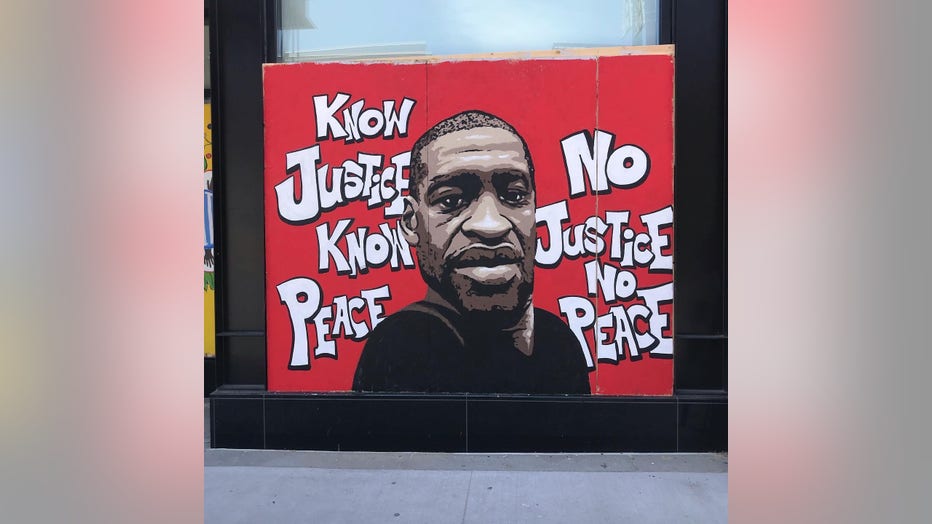 “As you can see, it just kind of says leave your message of support,” said Leesa Kelly, one of the people trying to preserve the street art that popped up after Floyd’s death. “So, we’ve tried to make them as neat as possible.”

After participating in the protests, Kelly was looking for a way to stay involved. She believes collecting the murals that paint a different picture of the Twin Cities during that turbulent time is a good way to keep the momentum of the movement alive.

Kelly teamed up with another young Black woman Kenda Zellner-Smith and the Minnesota African American Heritage Museum to create Save the Boards to Memorialize the Movement.

So far, they’ve collected about 150 boards from stores and businesses in hopes of finding a climate-controlled storage space to keep them safe until they can be put on display for the community.

“I was like, what is going to happen to all these?” she asked. “Art has always been a storytelling mechanism throughout history and I was like this is the art that is going to tell this story. The story is literally written out and drawn out scene here on these boards.”

They aren’t the only ones trying to immortalize these creative pieces of Minnesota history.

“We are operating under the assumption that this is the biggest art event in history and the art is on the street for the public to see,” said Dr. Todd Lawrence, of the University of St. Thomas Urban Art Mapping Project.

The project started a database to collect and map photos of George Floyd and anti-racist street art.

“it’s been unbelievable to see how important art and artists are to this community,” said Lawrence.

The pieces range from fully realized murals to simple drawn or spray-painted words or phrases. Together, they represent the full spectrum of emotions and experiences of the artists and reveal the power of an art form many never noticed or acknowledged before.

“The motto of our team is ‘Walls Speak’ and we really believe that what’s on the walls is a representation of what people are feeling and what’s in their hearts,” said Chioma Uwagwu, of the Urban Art Mapping Project.

So far, the database has collected more than 1,300 images. They are not just from Uptown, Downtown and Midway, but from across the country and around the world.

“I think this is all really powerful and I think it will make people think about how they view art because these probably won’t end up in museums and I think people need to see art and how it intersects with their lives outside of museums, outside of classrooms and this is a really great time to do that,” said Uwagwu.

Kelly hopes to display the boards in a park near 38th and Chicago for seven days around the anniversary of George Floyd’s death every year. Saving the art that means so much to so many is the real masterpiece.

“Things have to change,” said Kelly. “They can’t go back to the way they were. And if that means starting with the way we preserve art that comes out of a civil rights movement, so be it.”

Save the Boards to Memorialize the Movement is trying to raise $50,000 to preserve those George Floyd murals. If you’d like to help, visit their GoFundMe.