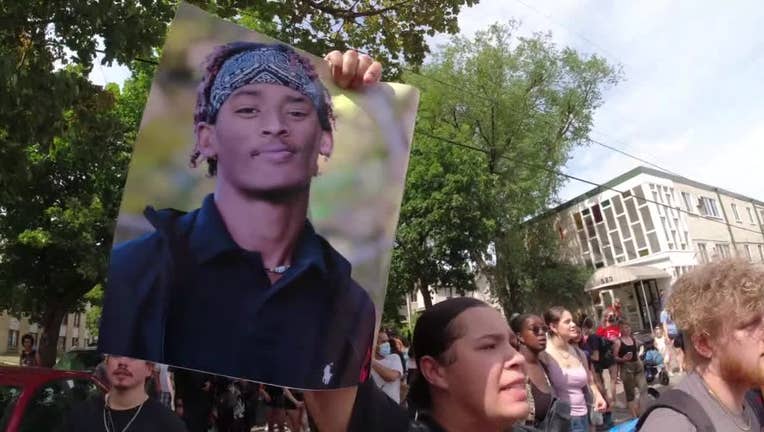 Nearly a week after a standoff ended in the death of Andrew Teklke Sundberg, and two days after a protest on his behalf was interrupted disputing its intentions, newly released 911 call transcripts offer a glimpse into the moments after shots were fi (FOX 9)

MINNEAPOLIS (FOX 9) - A new report released by the City of Minneapolis is giving a better timeframe of the moments leading up to Tekle Sundberg being shot by the Minneapolis police snipers after an hours-long standoff.

The report from the Minneapolis Fire Department catalogs radio calls during the standoff. It's unclear if the record is a full and accurate account of the events.

The information below is based on that report.

Video: 2-hour live stream of the standoff between Minneapolis Police and Tekle Sundberg

This more than two-hour long video is from a live stream filmed by a user on the Citizen app of the standoff between Minneapolis police and Tekle Sundberg sometime before Sundberg was fatally shot by MPD snipers. The video has been publicly available on the Citizen app since it was taken and Fox 9 obtained permission to republish it.

911 calls come in; shots are fired in the apartment building

The first calls for the shooting that sparked the standoff came in just after 9:30 p.m. on June 13 for a woman reporting someone had fired shots into her apartment. As we later learned, that woman was Arabella Yarbrough, who was in the apartment with her two young children.

Yarbrough told police she suspected it was Sundberg but the report shows police weren't sure if the shots were fired intentionally or not.

At 9:41 p.m., police arrived and helped get her out of the apartment. But, while police are in the building, more shots are fired. The report details that the incident is upgraded to an "active shooter" situation.

With that, more backup is called out along with a BearCat armored vehicle, armor shields, and rifles.

At 9:44, police reported that the third floor still needs to be evacuated. Two minutes later, police reported citizens were leaving the building. By 9:50, police had evacuated the first and second floors. About ten minutes later, one resident would warn officers that she left something baking in the oven and was concerned it would burn. Later in the night, police would report something was burning.

As of 9:50, police report there are no known injuries.

At 9:55 p.m., all on-duty SWAT team members are called to respond to the scene.

What started as a rally for a man shot and killed by Minneapolis Police quickly took a turn after Arabella Yarbrough, the mother of two nearly hit by bullets while inside her apartment, showed up to share her story on Saturday afternoon.

At about 10:01 p.m., police spotted a man looking out the window of the apartment where they believed the shots came from. Police say he had a bottle in his hand. Shortly after he walks away but comes back towards the window. In the report, police say they are worried he will jump.

But then, at 10:03, police report he is hanging out the window with a cell phone in his hand and appears to be taking a selfie photo.

A minute later, police say a negotiator's truck is en route to the scene.

At 10:20 p.m., police requested for someone to get on the public address system and ask for Sundberg to come out with his hands up. Shortly after, police reported that Sundberg peaked out the window.

Around 10:45 p.m., police are able to identify Sundberg as the person in the apartment and get a phone number that is shared with negotiators.

An hour later, police are able to make contact with Sundberg's mother who tells officers he goes by "Tekle". At 11:30 p.m., police say they've attempted five phone calls to Sundberg with no answer.

The parents of Tekle Sundberg, Cindy and Mark Sundberg speak to the press following a rally on Saturday

By midnight, police have been unable to make direct contact with Sundberg over the phone. However, Sundberg has yelled from the apartment, at one point standing on the window ledge and yelling at police.

At 12:10 a.m., police say Sundberg's parents are on their way to the scene. They arrive shortly before 12:30. Shortly after, police say it appears Sundberg is using his phone. But it's unclear who -- if anyone -- he was talking to.

Around 12:45, police leave a voicemail and send a text message to Sundberg, telling him his parents were there. Minutes later, the police send a video of Sundberg's father to him. At 1:15 a.m., calls are still going to voicemail for Sundberg. But, police continued to make PA announcements.

By 2 a.m., there is still no answer to Sundberg's phone. A drone spots that Sundberg has barricaded the door.  Sundberg proceeds to shut windows and pull the drapes.

Police continue to make announcements on the PA system as 3 a.m. approached. In response, Sundberg has turned up music playing in his apartment. Police later announced they will use less-lethal 40mm rounds to break out windows until the curtains are down.

At 3:30 a.m., police start firing the 40 mm rounds to break the windows. Police report the curtains didn't fall, but they can see more into the apartment than before.

At 4:05, police announce they will set up a "gas plan." About five minutes later, Sundberg returns to the window and again seems to be taking a selfie.

At 4:15 a.m., police reported that Sundberg has returned to the window with "some sort of object." Again, police say he appears to be speaking with someone on the phone. At 4:18, police say he threatens to shoot officers and break out more windows. Less than a minute later, two shots are fired from "Sierra 1-2" -- presumably the police snipers.

At that point, Sundberg is now on the ground. By 4:20, police breach entry into the apartment and start to render aid.

Sundberg is rushed to the hospital where he later died.