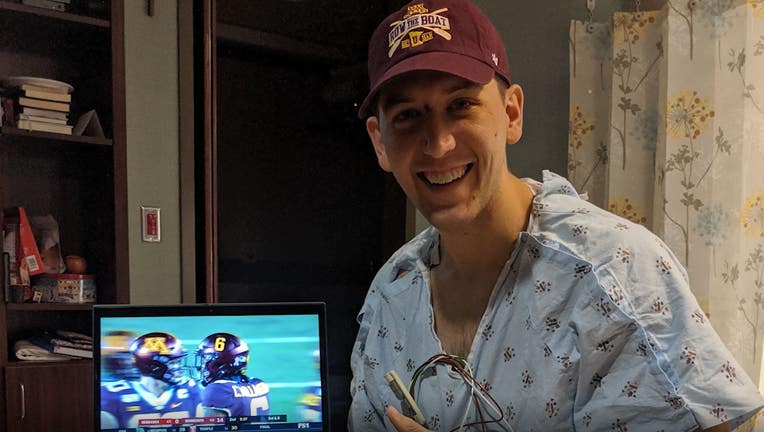 Tyler Moon is expected to make a full recovery after he suffered a cardiac arrest during the TC 10 Mile.

MINNEAPOLIS (FOX 9) - For nearly 15 minutes, a young man’s heart stopped during a rare cardiac arrest emergency during the Twin Cities 10 Mile race a few weeks ago.

Thanks to the help of fellow runners, who helped him in those crucial moments, he is expected to make a full recovery.

A 25-year-old man was rescued by fellow runners after he went into cardiac arrest during the Twin Cities 10 Mile earlier this month.

Tyler Moon, 25, says he was excited to compete in his first 10-mile race after training all summer.

“When the gun fired off I felt really good and ready to go and go all the way,” said Moon.

After seeing his family and fiancé around Mile 1, he kept going. Not long after, he collapsed face down.

“I heard this big heavy sigh, this poor guy went face down—didn’t try to break his fall or anything like that - just face down and skidded a little bit,” said Dr. Grant Morrison.

Dr. Morrison, a sports medicine physician for University of Minnesota Health Fairview, was one of several doctors and nurses who immediately stopped to help Moon.

“There were people who would come by and identify themselves and get involved and people taking turns and doing chest compressions and breathing—I was worried about a neck injury, so I was stabilizing his head most of the time,” said Dr. Morrison.

Moon's heart stopped for nearly 15 minutes. He eventually woke up in the hospital terrified of what was going on. After spending a week at the Mayo Clinic, doctors don't know why his heart gave out. He doesn't have any underlying heart issues and his stress tests all came back fine.

“It is a little weird to feel like there’s no real answer as to why it happened,” said Moon.

Moon says he isn't focused on the why, but he's focused on his future and the second chance at life he's been given. His running bib read, “Jesus Saves,” and he truly believes that's what happened to him three weeks ago.

“How they ran and where they ran and all these just like little minute things ended up just being a life-saving decision,” said Moon.

For now, Moon has to wear what's called a life vest, which looks like a fanny pack around his neck. If his heart stops again, it will automatically shock him. He's scheduled for open heart surgery again at the Mayo Clinic.

After he gets married in January he wants to complete the rest of the 10-mile race with his soon-to-be wife.