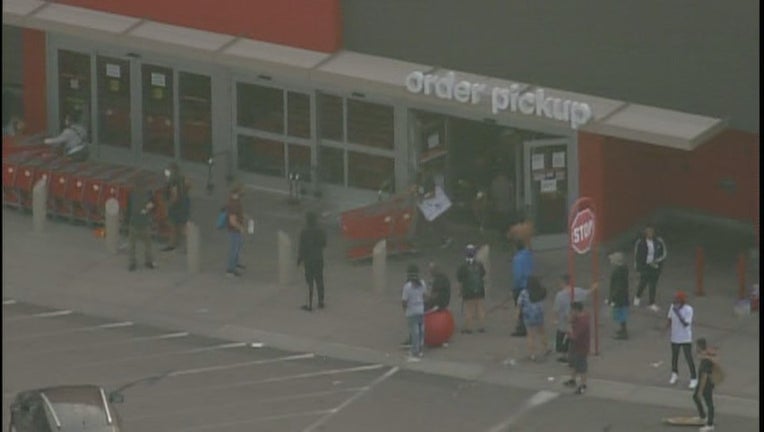 MINNEAPOLIS (FOX 9) - Target announced it is planning to rebuild its Lake Street location and pay the nearly 200 displaced workers after the riots in Minneapolis earlier this week. Target is also proving first aid, food and basic essentials to the Minneapolis community.

On May 27, the Target off Lake Street in Minneapolis was the epicenter of looting as riots over the death of George Floyd continued. Shortly thereafter, Target temporarily closed several nearby locations as a precaution.

Protesters damaged law enforcement squad vehicles at a St. Paul Target. Protests have been bubbling in the Twin Cities metro area in response to the death of George Floyd.

In a release, Target CEO Brian Cornell wrote that the company is working on repairing and rebuilding the location on 2500 E. Lake Street, as well as preserving approximately 200 local jobs. The timing of construction will be determined in the coming weeks, with the goal of opening in late 2020.

Team members impacted by store closures will be paid for up to 14 days of scheduled hours during store closures, including COVID-19 premium pay. They also will be able to work at other nearby Target locations.

"Target is providing goods through partnerships with local nonprofits, including bottled water, food, baby formula, diapers, dry goods, common first aid supplies and medicine. Target also is working with Hands On Twin Cities to bring together Target volunteers to support immediate recovery efforts. Target will assist small businesses in their efforts to rebuild through our philanthropic commitments. Small businesses can apply for grants at the Target Foundation website," Cornell wrote.

Target will also reopen other damaged stores in the Minneapolis/St. Paul area in the coming weeks, Cornell wrote.