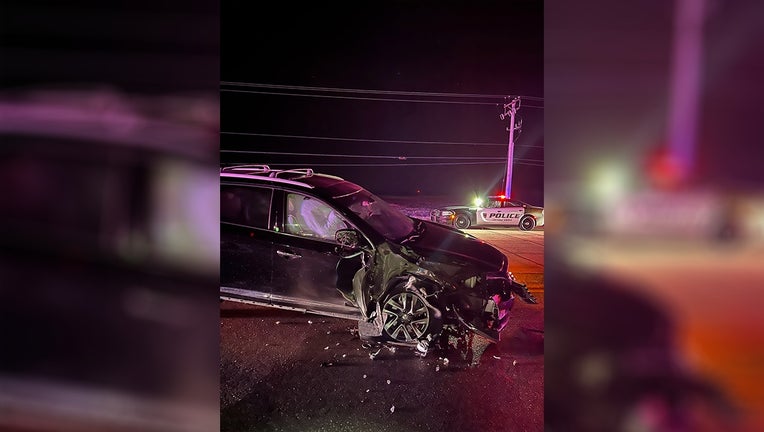 Pictured is a vehicle involved in a wrong-way crash by a suspected drunk driver. (Photo credit Cottage Grove Police)

COTTAGE GROVE, Minn. (FOX 9) - Cottage Grove Police used a wrong-way crash on Friday as a reminder for the dangers of drinking and driving after a pregnant woman was injured during the collision.

The police department said at 8:45 p.m., a man from Nebraska was driving the wrong way on Keats Avenue and crashed head-on into another vehicle near 70th Street.

A woman who was 34-weeks pregnant was in the passenger seat of the other vehicle. Police said she was transported to the hospital with non-life-threatening injuries to be evaluated. They did not provide further details about the baby or the woman’s current condition.

The man was arrested on suspicion of a DUI and booked into the Washington County Jail early Saturday morning. The driver has not been formally charged at this time, according to jail records.

"Please use this as a reminder to not drink and drive, and to spread the same message to those around you," Cottage Grove Police Department said in a Facebook post.

The Minnesota Office of Traffic Safety reminded people to plan a safe ride home when celebrating the holidays, and there is extra DWI enforcement on the roads.