Clean up begins in Minneapolis after Wednesday's storm

One neighborhood in Southwest Minneapolis is waking up to plenty of damage after severe weather rolled through the state.

(FOX 9) - Severe storms that pushed across Minnesota on Wednesday left behind damage, took down trees, knocked out power, and caused flooding across the metro.

As of Thursday morning, Xcel says they are still working to restore power to some 30,000 customers.

The storms, which moved across the state, west to east, throughout the evening, prompted multiple tornado warnings over the course of the evening. In the western portions of the state, authorities reported downed trees, downed power lines, and damage to buildings and barns.

Closer to the metro, things weren't any better. FOX 9's Rose Schmidt was at a home in Edina where a tree had fallen onto it. There were other reports of trees onto homes and vehicles in Minneapolis and Brooklyn Park among other areas.

There were more than 100 reports of severe weather across Minnesota on Wednesday, including large hail and wind gusts topping out at 79 mph in Morristown, while the Twin Cities saw peak gusts ranging from 60-67 mph.

Flash flooding was also a major issue in parts of the Twin Cities thanks to the 1 to 2 inches of rain that fell during the storm. Other areas picked up even more rain, with pockets of 3-4 inches in some cases. Buffalo got 3.87 inches of rain, Delano saw 3.40 inches and Willmar picked up 2.86 inches.

A house in Coon Rapids, Minnesota split in two after a tree was uprooted during Wednesday night's storm

Neighbors say the two people and five dogs who live in the home were in the basement when the tree fell on the house, adding that no people or dogs were injured.

Neighbors say the two people living in a house in Coon Rapids and their five dogs were in the basement when a large tree fell on their home and split it in two on the 400 block of 105th Lane Northwest.

"I'd rather be in a hurricane than straight-line winds," neighbor Sharron Sloan, who grew up in North Carolina, told FOX 9 while surveying the damage Thursday morning.

Power out at Hopkins High School

Hopkins High School announced early Wednesday that there will be no in-person learning because last night's storm knocked out power to the building. Online learning will begin at 10:30 a.m.

In Bloomington, firefighters shared a photo of trees down across a roadway that had knocked down power lines.

"BFD crews responding to numerous incidents from earlier severe storms. PW crews have been called in to remove trees from roadways. Several areas of the city are without power," the tweet reads.

What do you do when water starts pouring into your basement through a ground-level window? Cross your fingers and grab a plastic bin. Meghan Walsh shared this video from St. Paul.

What do you do when water pours through the window into the basement of your house? Grab a plastic bin. Video from Meghan Walsh in St. Paul, Minnesota during May 11, 2022 storms. 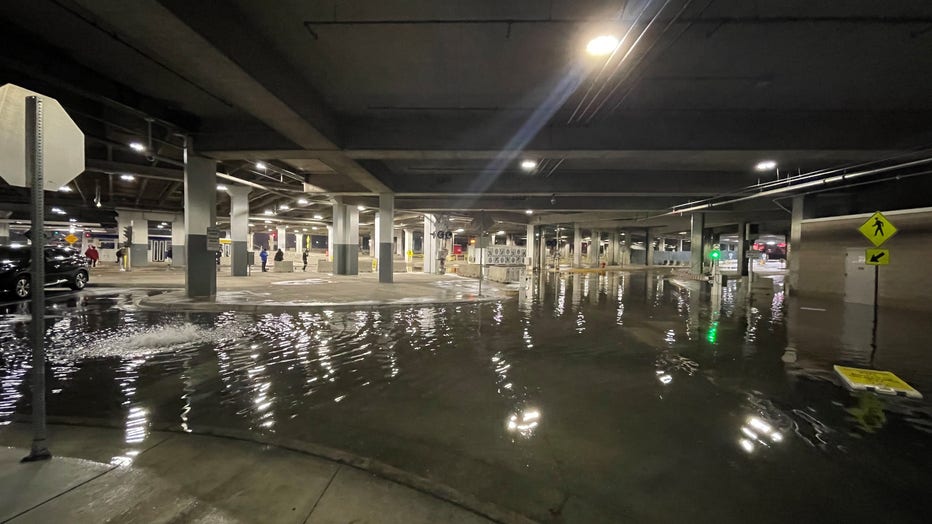 A viewer photo showing flooding at the Mall of America Transit Station.

The strong storms disrupted sports games as well. The Twins were forced to suspend their game versus the Astros. It will be resumed Thursday at 12:10 p.m.

The heavy rains also flooded out Allianz Field where the Minnesota United were playing Colorado. That game is likely to be finished Thursday afternoon.

Heavy rains flooded out Allianz Field in St. Paul. Minnesota United vs Colorado Rapids in the US Open Cup was postponed until Thursday.