Stevens County Sheriff Jason Dingman spoke with FOX 9 on the damage caused by storms that ripped through Minnesota on Thursday.

(FOX 9) - Tornado warnings and severe thunderstorm warnings were issued for communities in the Twin Cities metro as severe storms barreled through Wednesday night.

Heavy rain with localized flooding and wind gusts of more than 75 mph have been reported. Other threats with these storms include hail and the possibility of tornadoes. Meanwhile, tens of thousands of people are without power.

By 8:50 p.m., the severe weather threat in the metro area from a line from Minneapolis westward had diminished. And by 9:40 p.m., the severe threat had ended for people from downtown St. Paul to all areas west. That being said, the Twin Cities metro is still seeing rain, localized flooding and rumbles of thunder.

The threat of severe weather remains in southeastern Minnesota and west-central Wisconsin, where a tornado watch remains in effect until midnight.

For the latest on these severe storms, watch the live video above or right here. The latest weather alerts in effect are here.

A meteorologist from Mexico was killed on Wednesday as they were stormchasing in southwest Minnesota as strong storms rocked the state.

See the original story below.

Just a week or so after it felt like spring started, we're going to get a two-day preview of the dog days of summer.

Much warmer temperatures and tropical-style humidity arrive through the day Wednesday after some morning storms diminish in southern Minnesota. It's this surge of heat and humidity that will lead to storm chances late in the day Wednesday and Wednesday night, when a severe weather outbreak will be possible.

After a busy weather week already, another round of storms are set to move through Minnesota and the Twin Cities metro on Wednesday.

Tornado warnings and a tornado watch were issued Wednesday evening as storms roll into the Twin Cities. The watch includes most of southern Minnesota and western Wisconsin.

These storms could contain all severe weather elements, starting with very large hail and an isolated tornado threat, but then likely transitioning to gusty wind and heavy rain threat as storms become more numerous and gradually push eastward into Wisconsin overnight. 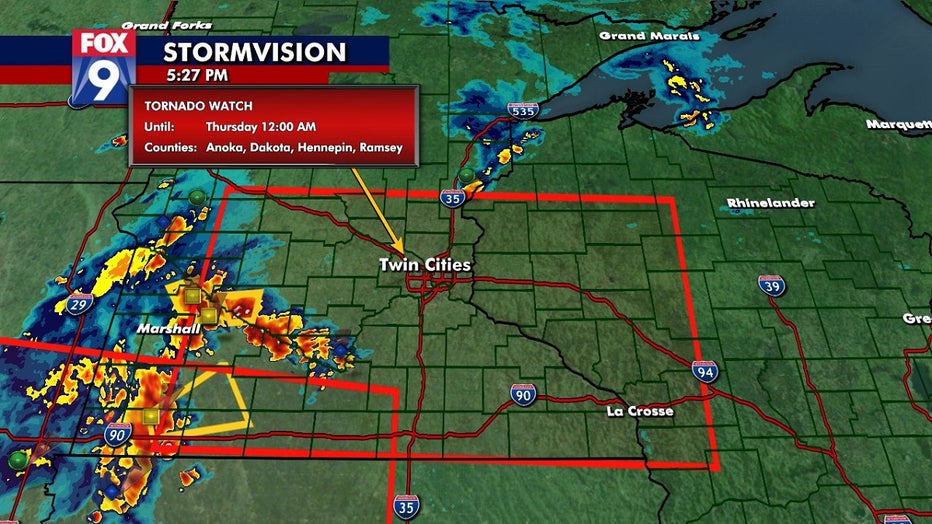 Areas in the red box are included in the tornado watch on Wednesday. (FOX 9)

Because the atmosphere will be quite saturated with moisture, heavy rain rates look likely. Because of this, and the possibility of multiple rounds in some areas, flash flooding could be an issue with pockets of 2- or 3-inch-plus of rain possible.

You can see that possibility in the image below. 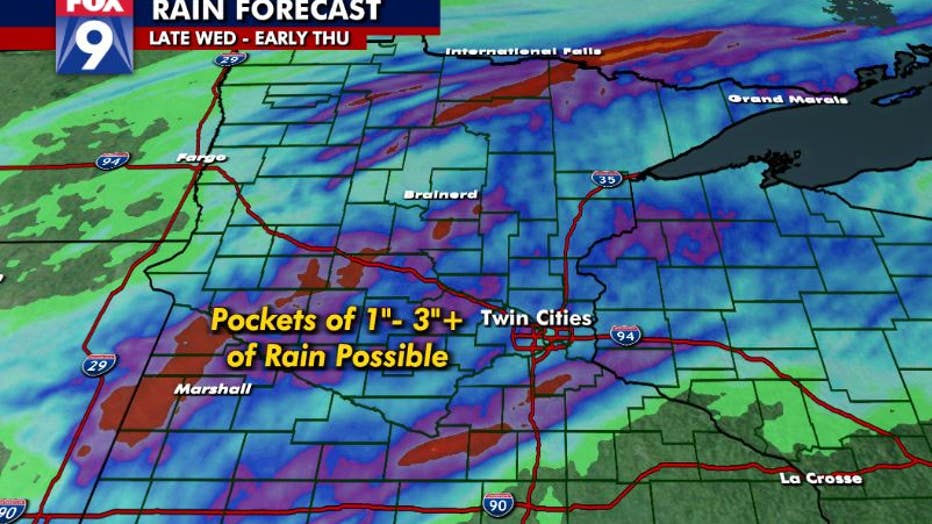 The overall location of the heavy rain on the image above is not set in stone — it's coming straight from a computer model. But notice the pockets of very heavy rain located here and there indicating the possibility of flash flooding in some spots. Exactly where those end up though is anyone's guess. #StaySkyAware

Thursday will be another hot one with temps in the 90s.