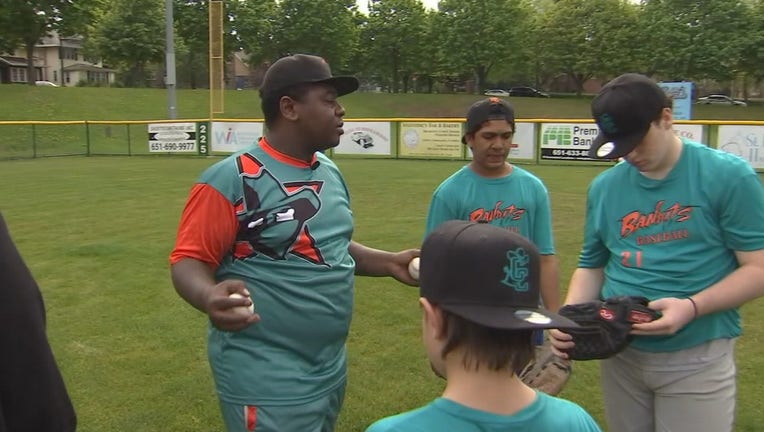 A coach for the Capital City Youth Bandits addresses his team before a game. (FOX 9)

ST. PAUL, Minn. (FOX 9) - Coaches with Capital City Youth Bandits say they went in protector mode when they heard at least 20 gunshots during the team’s baseball practice in St. Paul on May 10.

"We were pushing kids to the ground and had coaches laying on top of the kids," said Coach Tedric London, co-founder of the team. "I was kind of shook up a bit and I know the kid was for sure."

Coaches with Capital City Youth Bandits say they went in protector mode when they heard at least 20 gunshots during the team’s baseball practice in St. Paul on May 10.

It’s frustrating for the coaches, who say they no longer feel comfortable playing in the fields near Stinson Street.

"It feels like it's a continuous thing," he said.

London teamed up with Coach Gregory Smith to launch the youth program team back in 2018. It started with just football, but the kids pushed them to offer sports all year round. They offer football, basketball, and now baseball.

"It was another shooting and we wanted to branch off," said London. "My main thing was keeping these kids safe. We had a lot of kids traumatized and we had some kids that didn’t want to come back."

But even after branching off, a football player with the team was caught in a different crossfire in 2020 while riding his bike. He was on his way to practice when he was shot.

"We invested in a van to make sure all these kids got home and to practice safe and then we came into this [latest] incident last Monday," he said.

The coaches say these players were so shaken up by the shooting that they’re not going back to their previous playing field. Now, they’re looking for a new place to practice in.

"It’s pretty much where we can get some fields or some playing time in," says Coach Smith.

St. Paul police say reports of gunfire are up 69 percent compared to this time last year. By May 17, a reported 78 people were shot compared to 67 total at the end of May last year.

Coach London and Coach Smith invest their own money in the program.  They don’t turn away kids who can’t afford to play. That’s why they’re pleading with people to put the guns down.

"Just stop it’s just not worth it," said Smith. "We’re already rebuilding, so why tear it up even more. I just want them to stop. That’s my message."

"I just want to be able to reach out to people and [tell them] to put the guns down. Let’s let these kids live and have fun," said Coach London.