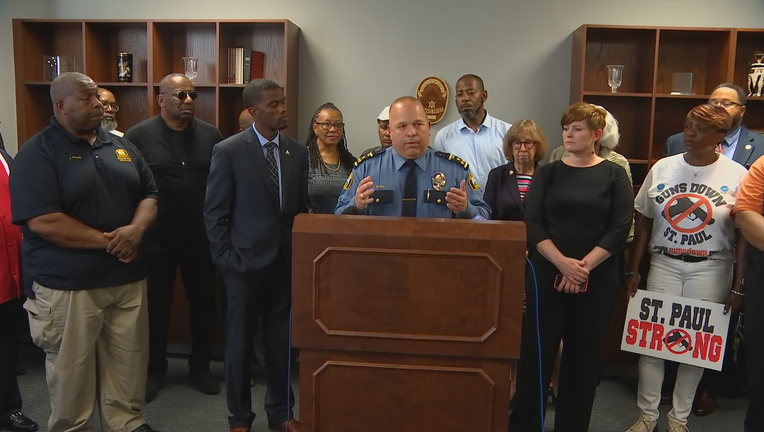 ST. PAUL, Minn. (FOX 9) - In reponse to three deadly shootings in St. Paul in just nine hours, St. Paul Police Chief Todd Axtell is stepping up patrols in every district throughout the city.

Chief Axtell made the announcement at a joint press conference Tuesday afternoon with St. Paul Mayor Melvin Carter. Chief Axtell called the night of violence an "anomaly," saying he's never experienced anything like it in his 30 years on the force.

Police Chief Todd Axtell and Mayor Melvin Carter talked about the recent rash of gun violence in the city of St. Paul.

"These senseless deaths have taken something sacred from our entire community, and that's our sense of security," said Chief Axtell.

As part of a five-step plan, Axtell said the department has called in officers on their off days to join increased patrols. The other points of the plan include establishing a task force with the other police units to focus on homicide investigations, using new technology to better review surveillance video related to gun crimes, working with community leaders and other partners to find suspects and ramping up efforts to engage the public.

"Our foundation may have been shaken, but our resolve is as solid as ever," said Chief Axtell.

So far this year, 113 people have been injured by gunfire in St. Paul, which Chief Axtell says is the highest year-to-date total in the history of the department. As to what is behind the increase in gun violence, Axtell says he's seen a shift in how fights are handled amongst gangs and small groups.

After a violent stretch in St. Paul, the police chief announced added patrols at a press conference Tuesday.

"Young people [are] settling their disputes for the most part with guns," said Axtell. "Yesterday's fistfights are today's gun fights, really, and a lot of it is over disrespect. A lot of young neighborhood groups that identify themselves as gangs are involved in quite a few of these shootings."

Police say two 15-year-old boys were arrested in connection to the murder of an 18-year-old man on Rice Street. A 27-year-old man has been booked following the deadly shooting of 31-year-old man at Case Avenue E and Edgerton Street.

Announced Tuesday, the City of St. Paul received a $750,000 grant to expand its use of the Crime Gun Intelligence Center in partnership with the Bureau of Alcohol, Tobacco, Firearms and Explosives St. Paul Field Division.

The grant provides funding for a crime analyst, a National Integrated Ballistic Information Network technician, a CGIC prosecutor and training, according to a release.