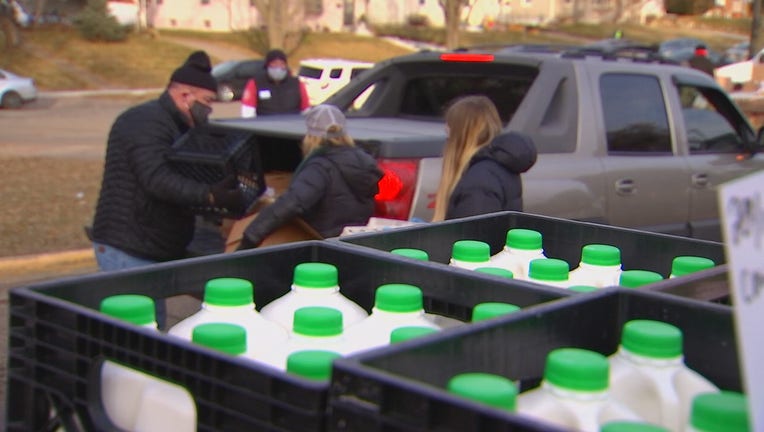 Volunteers distribute food to hungry Minnesotans ahead of the Christmas holiday.

ST. LOUIS PARK, Minn. (FOX 9) - A St. Louis Park nonprofit is among dozens of organizations working to fight food insecurity in the state of Minnesota.

To help address what they say is a growing need this year, "Seeds Feeds" is taking its outdoor farming operation indoors.

With the help of a grant and partnerships with local farmers and grocery stores, for the past few months Seeds Feeds has been distributing free food to Hennepin County residents in need.

"The need is very high," said Ariel Steinman, of Seeds Feeds. "People from all over the Twin Cities were reaching out to us, from Minneapolis, Hopkins, Golden Valley, up to Fridley, down to Richfield, and we realized that we wanted to expand our reach."

During warmer months, the nonprofit manages 10 food back garden throughout St. Louis Park. Now, the organization is taking its urban farming operation indoors.

With its grant set to expire at month’s end, the organization is planting seeds inside a St. Louis Park warehouse.

"We are working on funds to keep providing for the rest of the winter months," said Steinman. "And if our indoor growing keeps ramping up, then we’ll have some of that food to provide to people as well."

With a growing number of people going hungry, Steinman believes that this is a form of urban agriculture that can help feed a community.

"Our ultimate goal would be to end food insecurity and to end hunger in the world," said Steinman.

Seeds Feeds estimates that it has reached more than 1,000 families. The nonprofit also focuses on education and job training as well as food justice advocacy.