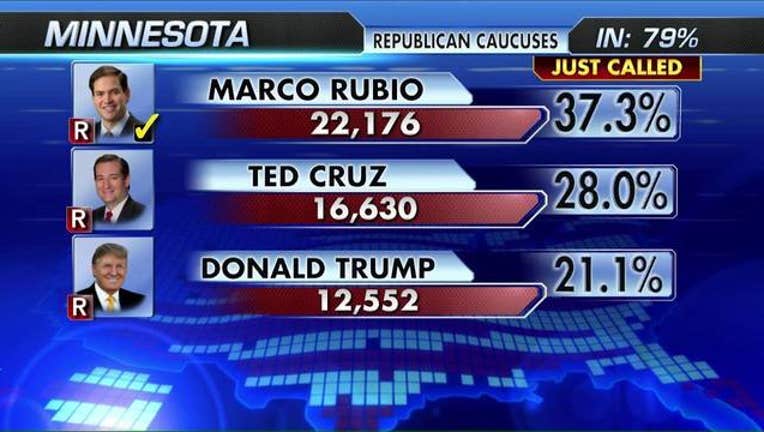 MINNEAPOLIS (AP) -- The Latest on campaigning in Minnesota on Super Tuesday, when the state's Democrats and Republicans hold precinct caucuses (all times local):

Minnesota Republicans say they set a record for turnout in Tuesday's precinct caucuses.

Spokeswoman Katie Boyd says the party has counted 79,000 participants so far with only about 70 percent of results in. She says that is 15,000 more than in the record year of 2008.

Florida Sen. Marco Rubio scored his first victory in Minnesota and Vermont Sen. Bernie Sanders picked up a much-needed victory on the Democratic side.

Bernie Sanders has captured a critical win in Minnesota's caucuses.

The Vermont Democrat beat Hillary Clinton to take the largest share of the state's available delegates. Sanders had put a sharp focus on Minnesota's contest, making several stops in the days before the Tuesday's vote.

Minnesota was one of 12 states hosting presidential votes in a day dubbed Super Tuesday. Minnesota had 77 delegates up for grabs, but Sanders won't win them all. The party's caucus system awards them proportionally based on each candidate's share of the vote.

Sanders' path to the nomination relies on wins in caucus states like Minnesota, where the voting format favors candidates with strongly committed supporters. But a bulk of party superdelegates have already committed to Clinton.

The Florida senator chipped away at Donald Trump's sizable lead in the march to the GOP presidential nomination by landing the largest share of Minnesota's delegates Tuesday. Texas Sen. Ted Cruz was vying for second place.

Minnesota was one of 12 states holding presidential votes on the day dubbed Super Tuesday.

Minnesota has 38 delegates, but Rubio won't claim them all. The state's caucus system awards them proportionally based on each candidate's share of the vote.

Rubio was the only Republican to visit Minnesota this year ahead of Tuesday's vote.

DFL Party Chairman Ken Martin says the party is seeing "huge turnout" at Tuesday's caucuses, including reports of long lines in St. Cloud, Mankato and Moorhead, but can't say yet if it will be similar to record turnout of 2008.

Martin said people should stay in line if they haven't yet voted. He says the party has gotten a few reports of precincts that ran out of ballots, primarily in south Minneapolis.

At the Maple Grove Middle School in that northwest Minneapolis suburb, hundreds of voters began pouring in before caucus registration began. A half hour before start time, the auditorium was full and organizers began directing newcomers to smaller rooms that also quickly filled.

Dozens of attendees wanting to hear from speakers such as former gubernatorial candidate Jeff Johnson and Hennepin County Sheriff Rich Stanek crammed into the entranceways, lined the aisles and covered the floor of the auditorium.

As Johnson, the state chair for Sen. Marco Rubio's campaign, told voters that his candidate was the only one who could beat Hilary Clinton, the auditorium erupted in a thunderous applause.

Meanwhile, more than a thousand voters wound around staircases and hallways inside a Minneapolis recreation center, waiting in line to cast ballots for the Democratic caucus. One precinct holding its caucus in the building ran out of printed ballots less than an hour into the voting, forcing officials to use scraps of notebook paper. DFL party officials said the votes would be accepted.

The big draw in each is a chance to weigh in on the presidential nominating process. The state is often an afterthought, but this cycle is part of the so-called Super Tuesday sweepstakes nationwide.

Neither party had updated numbers, but Democrats said activity was heavy in the metro area around Minneapolis-St. Paul. Republicans said they were seeing big turnout in the suburbs.

Both parties had predicted turnout would be high.

Some caucus-goers in Minnesota say they were making up their minds right up until casting their ballot.

In Minneapolis, 21-year-old Chelsey McKinney went to her first caucus torn between supporting Hillary Clinton or Bernie Sanders. McKinney -- who is black -- said Sanders is stronger on issues she cares about like supporting Black Lives Matter. But she's drawn to Clinton's political experience.

"He doesn't mince his words," McKinney said. "But Hillary Clinton, she knows politics. If she were anywhere in the White House, I would feel comfortable because I know that she gets the game."

In the northwest Minneapolis suburb of Maple Grove, Steven Trobiani walked into his GOP caucus clear on his choice: Marco Rubio.

Trobiani, a 65-year-old neurologist, said he thinks both parties have abandoned the middle class. He thinks Rubio is the answer.

He says if Rubio isn't nominated, he will vote for anyone who won't move the country farther left ideologically. He said that even includes Donald Trump -- "unfortunately."

As citizens stream to precinct caucus sites around Minnesota, Jon and Jennifer McCullough are making sure no one misses their support for Ted Cruz.

The couple set up a table at Maple Grove Middle School with Cruz signs and literature, all of which they supplied themselves. That included printing off 800 single-page handouts with information about the senator.

Jennifer McCullough, a 40-year-old high school teacher, said she and her husband researched all of the candidates and see Cruz as the true "constitutional conservative." They're not part of Cruz's campaign, but are passionate supporters.

Jon McCullough says the couple has attended some events held by Cruz's father Rafael, a pastor, and said it gave them some insight into how the senator was raised and why he is "so passionately in love with not only America but also the Constitution."

They say they will still vote for a conservative candidate if Cruz isn't the nominee, but aren't sure who they will support.

Dayton tells The Associated Press that he thinks Clinton would win decisively if Tuesday's presidential preference vote was done as part of a primary. But it's not, and Dayton says caucuses "are such an unknown" because so many things can come up to keep people from attending.

Bernie Sanders is trailing Clinton but has invested a lot of time in Minnesota, where he says he can win if turnout is strong.

Dayton has been a longtime Clinton supporter and has pledged his support as a superdelegate to the national convention no matter how she does Tuesday. He says he expects her to have a good night around the country as Super Tuesday unfolds.

A gun safety group is planning to attend more than 150 precinct caucuses across Minnesota to try to build support for gun safety, including background checks.

The Star Tribune reports (http://strib.mn/1Ux8c7E ) the group includes survivors of gun violence as well as mothers. It's called Moms Demand Action for Gun Sense in America.

The group's volunteer coordinator, Marit Brock, tells the newspaper that the plan is to attend both Democratic and Republican caucuses to talk to neighbors about knowing where candidates stand on preventing gun violence.

Hillary Clinton is making her way through the Midtown Global market in downtown Minneapolis as Super Tuesday voters headed toward the polls.

The Democratic presidential front runner was confronted by a young woman who questioned her record on working with the Somali community and 1996 comments Clinton made calling young people who commit crimes "super predators."

At the time, the term was typically applied to young black men living in urban areas. Clinton made the remark while promoting her husband's 1994 crime bill -- now repudiated by many, including the Clintons -- during his re-election race. Aides confirmed the encounter, pointing out that Clinton met with Somali-Americans during a previous visit to the state and has support from many in the black community.

"Why don't you go run for something then," Clinton responded, after the woman kept questioning her record on racial issues.

Clinton is joined by Governor Mark Dayton and Minneapolis Mayor Betsy Hodges. She flew nearly 1,300 miles from campaign events in Virginia on Monday to build support in the state during the final hours before tonight's caucuses and polls close in 12 other Super Tuesday contests.

Marco Rubio is reminding an audience in Minnesota about what can happen when voters angry with the political establishment elect an outspoken celebrity.

In a ballroom in a northern Minneapolis suburb, Rubio asks, "How did that work out for Jesse Ventura?"

Rubio is referring to a flamboyant former professional wrestler elected governor of Minnesota for one term from 1999 to 2003.

Minnesota holds caucuses for the Republican presidential nomination Tuesday evening. Rubio is trying to catch Trump who leads in many of the 11 Super Tuesday states, and has taken to painting Trump as an unprincipled celebrity charlatan.

Rubio is in Minnesota for the quick rally after blitzing over the past four days Southern states holding Super Tuesday primaries today.

He was in Virginia, Tennessee, Georgia, Arkansas and Oklahoma Monday alone, making five stops and nearly losing his voice.

Rubio was planning to fly from Minnesota to his home in Miami Tuesday to await the results of voting in the 11 states holding primaries.

Hillary Clinton says Republicans aren't even talking about issues in their protracted race for the GOP presidential nomination.

She tells reporters in Minneapolis that the GOP candidates are "now running their campaigns based on insults. It's turned into a kind of one-upmanship on insulting."

She also says she is "disappointed" that Donald Trump did not disavow David Duke and the Ku Klux Klan in a weekend interview.

Clinton added that Trump "obviously" has done very well and "could be on the path" to the GOP nomination.

She spoke as voters in 11 states holding GOP contests went to the polls on Super Tuesday.

Trump has disavowed Duke, but did not do so when asked about the former KKK grand wizard in a CNN interview on Sunday. He subsequently did disavow Duke

Gov. Mark Dayton and other supporters of Hilary Clinton have gathered to greet her at a Minneapolis coffee shop on Minnesota's precinct caucus day.

In the race for the GOP presidential nomination, Florida Sen. Marco Rubio was due to appear at a rally in the Minneapolis suburb of Andover at 12:30 p.m. Tuesday. Rubio also held a rally in Minneapolis last week. He recently picked up endorsements from former Minnesota Gov. Tim Pawlenty, former U.S. Sens. Norm Coleman and Rudy Boschwitz, and U.S. Rep. Erik Paulsen.

The stakes are high for Bernie Sanders on Minnesota's caucus day.

The Vermont senator is eyeing Minnesota as one of his potential opportunities to cut into former Secretary of State Hillary Clinton's big lead for the Democratic presidential nomination. Sanders needs to perform well in caucus states to pull off a win, and he has made several recent visits to Minnesota.

It's one of 12 states hosting presidential preference polling on a day dubbed Super Tuesday. It's a critical point that could see some candidates nailing down their path to the nomination -- or heading back to their day jobs.

The Republican contest is wide open as the candidates have mostly focused on bigger states. Florida Sen. Marco Rubio is due to rally in the Minneapolis area on Tuesday.