RAW: Drone video of the Lake Harriet Bandshell in Minneapolis

The Lake Harriet Bandshell in Minneapolis is undergoing renovations in the coming months, and a group of residents is hoping the Minneapolis Park and Recreation Board will paint the bandshell back to its original blue-gray color.

MINNEAPOLIS (FOX 9) - A few hundred people have signed a petition asking the Minneapolis Park and Recreation Board to restore the Lake Harriet Bandshell back to its original blue-gray color.

The bandshell, which is now tan, is undergoing renovations in the coming months. The Change.org petition, started by Steve Brandt, a member of the Minneapolis Board of Estimate and Taxation, says the popular blue-gray color was replaced with an "unfortunate mud brown with little public input when the bandshell was repainted in 2004."

Brandt and others are hoping the Park Board will repaint it to the color it was when it was completed in 1986, saying "It's time to restore the original color, which echoes the surrounding sky and lake."

Brandt even wrote a post in Southwest Community Voices in support of the bandshell's color change. On Twitter, Brandt acknowledged this isn't "the most pressing issue" in Minneapolis right now, but it's "time to right a wrong."

Other work could include upgrades to lighting, electrical and restrooms, as well as adding a bird-safe coating to bandshell windows and replacing doors and door frames.

FOX 9 has reached out to the Minneapolis Park and Recreation Board for comment, and to see if painting the bandshell would be considered. We'll update this story when we hear back. 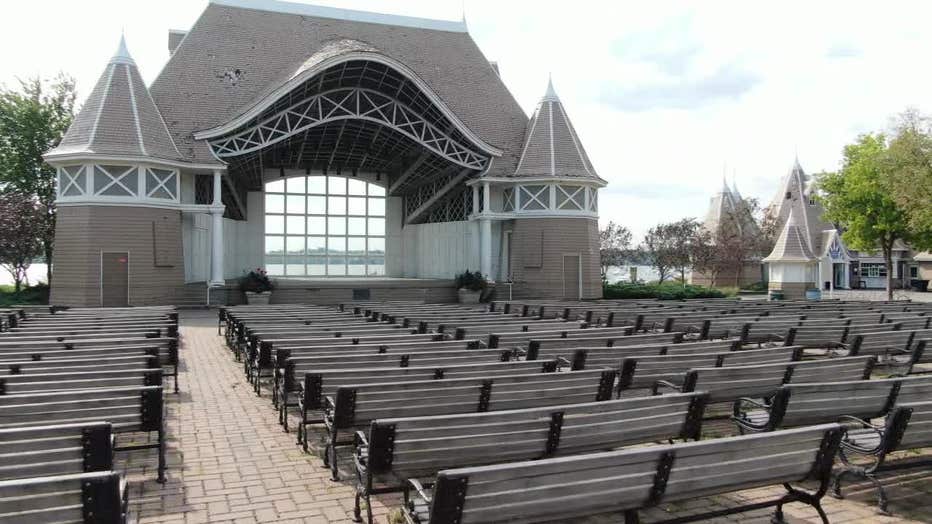 The Lake Harriet Bandshell is undergoing renovations in the months to come. Residents are hoping that will include painting the tan building back to its original blue-gray. (FOX 9)