Protesters step in path of train during downtown Minneapolis rally

Protesters calling for the release of dashcam video showing the shooting of a man in Richfield stood in the path of a light rail train on Friday during a rally in Minneapolis.

MINNEAPOLIS (FOX 9) - Protesters calling for more transparency in the shooting of Brian Quinones in Richfield last month took to the streets of downtown Minneapolis on Friday to amplify their call.

The group wants police to release the dashcam video showing the shooting of Brian Quinones by officers. 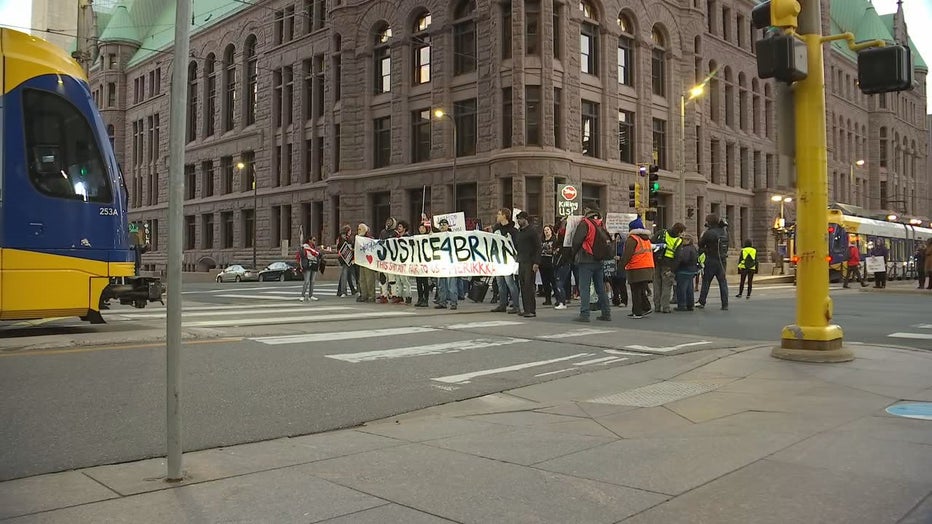 Protesters blocked a train in Minneapolis on Friday while calling for the release of police video in the shooting of a man in Richfield.

According to police, on September 7, Quinones failed to pull over for officers in Edina for a traffic stop. The chase was streamed by Quinones on his Facebook page and followed him as he traveled from Edina to 77th Street East and Chicago Avenue in Richfield with lights in pursuit.

In the video, at the intersection, Quinones jumps from his vehicle moments before officers opened fire.

The video shows Quinones had something in his hand as he exited the vehicle. Police say he confronted them with a knife before being shot and killed.

No officers were hurt and the Hennepin County Sheriff's Office is leading the investigation into the shooting.

Protesters calling for more transparency in the shooting of Brian Quinones in Richfield last month took to the streets of&nbsp;downtown Minneapolis on Friday to amplify their call.

This week, investigators shared dashcam video with members of the family during a private meeting. However, they say the video won't be released to the public as the investigation is ongoing.

"We lost somebody at the hands of somebody else," said Brian's wife Ashley Quinones. "So we have to get justice. It's not like they died of old age, he doesn’t have a disease, he’s not dying naturally."

Friday evening, protesters rallied at the Hennepin County Government Center in Minneapolis, calling on police to release the video and bring charges against the officers.

During the protest, the group moved from the center towards a light rail train route at 5th Street and 3rd Avenue. The marchers blocked one train for a brief period of time while chanting slogans and holding a banner reading "Justice for Brian."

"It’s the truth," said Ashley Quinones of the video. "That way it can’t have any false narratives. Its 100% the truth.

The group later moved off the rails, letting the train pass while marching down the street.