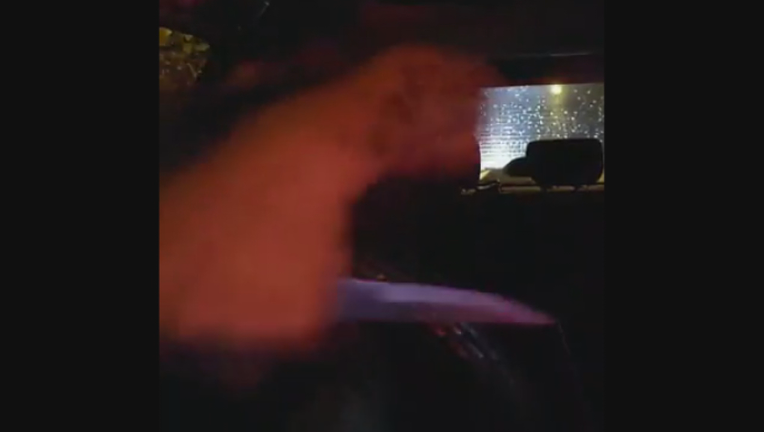 A freezeframe from the Facebook video shows what appears to be a knife in Quinones' hand. (Facebook)

RICHFIELD, Minn. (FOX 9) - Edina Police say the man shot and killed by police in Richfield Saturday night had a knife.

Edina released the statement late Sunday evening saying Brian Quinones "confronted officers with a knife" at the intersection of East 77th Street and Chicago Avenue before he was shot.

The Hennepin County Medical Examiner listed Quinones-Rosario's cause of death as a "homicide" due to "multiple gunshot wounds."

Edina Police said, at about 10:22 p.m., a police pursuit that began in Edina ended in an officer-involved shooting near the intersection of 77th Street East and Chicago Avenue in Richfield. The incident involved officers from the Edina and Richfield Police departments.

A department spokesperson says Edina police didn't have body cameras. It's not clear if Richfield officers were wearing cameras. It's also not clear which officers fired shots during the investigation.

The incident sparked protests near the scene Sunday night.

Family of friends of Quinones were left searching for answers Sunday night after the incident that left Brian dead.

As the investigation in the fatal officer-involved shooting in Richfield, Minnesota continue, questions remain as to what happened after the driver left his vehicle.

Twin Cities attorney Marsh Halberg has served as both a prosecutor and a defense lawyer. He is not involved in this case, but he shared his insight to give some perspective.

“You can use deadly force against a deadly weapon, and a knife is clearly a deadly weapon,” said Halberg. “So the issue here becomes if there’s the defense by the officer that he’s justified in using the force is was it reasonable.”

Halberg says the Facebook video may paint a different picture than other recent high profile officer involved shootings in the Twin Cities.

“This case is different than Noor, Castille, the others because this really seems to strongly suggest this is suicide by cop and based upon that I would be surprised if charges are filed in this case,” said Halberg.

Here is the full statement from Edina:

While the Hennepin County Sheriff’s Office continues to investigate a Sept. 7 officer-involved shooting, the City of Edina grieves alongside the family of the deceased, the officers involved and their families, and the Richfield and Edina communities.

On Saturday, Sept. 7 at 10:22 p.m., a police pursuit that began in Edina ended in an officer-involved shooting near the intersection of 77th Street East and Chicago Avenue in Richfield after a man confronted officers with a knife. The incident involved officers from the Edina and Richfield Police departments. No officers were injured during the incident.

The Hennepin County Sheriff’s Office is leading the investigation and will release more information after concluding interviews with witnesses.

The Hennepin County Medical Examiner’s Office is expected to release more information about the deceased, including his name, in the coming days. The City of Edina is fully cooperating with the Sheriff’s Office and requests the public’s patience as the investigation continues.

The Edina Police Departments chaplains are working with those involved during this difficult time.