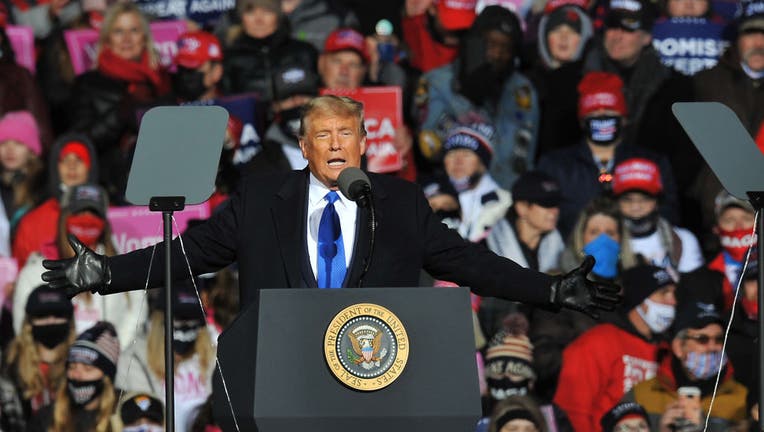 OMAHA, NE - OCTOBER 27: US President Donald Trump speaks during a campaign rally on October 27, 2020 in Omaha, Nebraska. With the presidential election one week away, candidates of both parties are attempting to secure their standings in important sw ((Photo by Steve Pope/Getty Images))

ROCHESTER, Minn. (FOX 9) - President Donald Trump will be making a final push in Minnesota ahead of Election Day with a campaign visit at the Rochester airport on Friday, according to the campaign.

The rally will be held at 5 p.m. The doors open to general admission at 2 p.m. This rally is the president's third campaign rally scheduled on Friday, following stops in Michigan and Wisconsin earlier in the day.

Trump last came to Minnesota for a rally in Duluth on Sept. 30. Shortly after he tested positive for COVID-19 and was hospitalized for several days. After a brief pause, the president returned to the campaign trail.

More than 1 million absentee ballots have already been returned statewide, according to the Minnesota Secretary of State Office. That amount is already about 40 percent of the entire voter turnout in 2016.