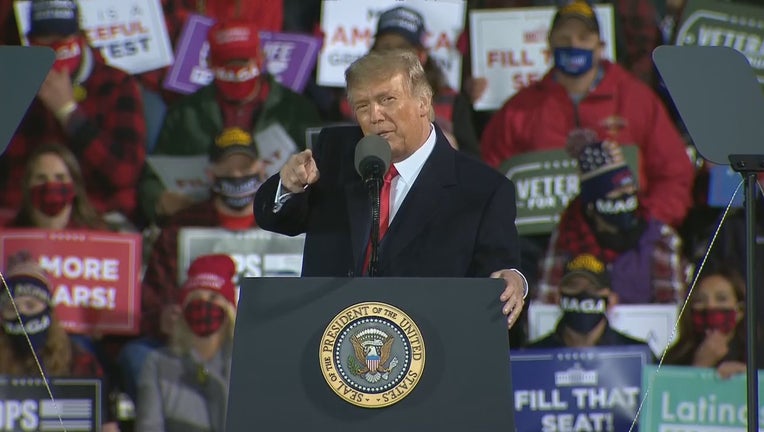 President Trump speaks from the stage at the Duluth airport during a rally on September 30, 2020. (FOX 9)

Trump started the rally by touting the big numbers the debate pulled in, rating what he says was the largest audience in cable television history.

"Last night, I did what the corrupt media has refused to do," said Trump. "I held Joe Biden accountable for his 47 years of lies, 47 years of betrayal, and 47 years of failure."

On the stage, Trump fired off attacks against Biden but also took issue with the moderation of the debate.

"I said, Sleepy Joe, name one law enforcement group that supports you," said the president. "Then Chris Wallace says, 'Don't do that.' Can you believe this guy? I was debating two people last night."

"How do you like Amy for the Supreme Court," Trump asked the crowd, referring to his nominee Amy Coney Barrett. "If he gets elected, the hard left will appoint radical justices who will terminate the Second Amendment."

After talking about the debate, the president moved onto his traditional rally topics, like public safety, immigration, jobs, the economy, and the riots of the past few months.

Like his previous rally in Duluth, Minnesota, the president against urged his supporters to not only head to the polls but also bring friends, family and coworkers.

In a statement prior to the rally, the Biden campaign put the focus on what they call a "mismanagement" of the COVID-19 pandemic that cost 2,000 people their lives in the state and 130,000 their jobs:

"Minnesotans deserve a president who will bring us together — not tear us further apart — and focus every single day on making their lives better. That starts with coming together to defeat COVID-19 and rebuilding our economy to include every Minnesotan — from Moorhead to Minneapolis, Redwood Falls to Rochester, and Duluth to Detroit Lakes."