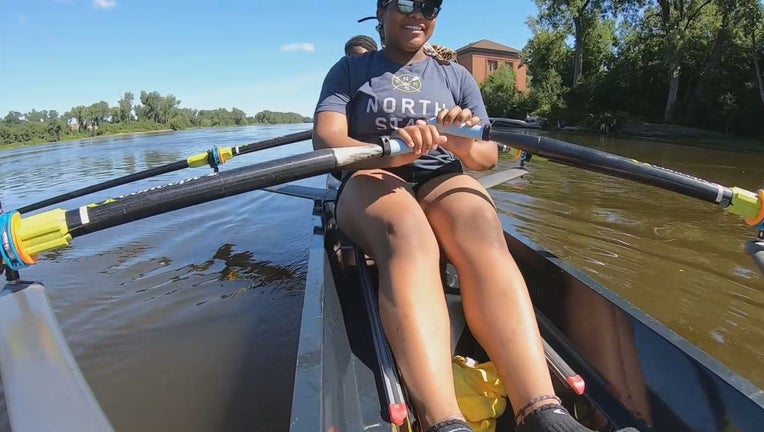 MINNEAPOLIS (FOX 9) - At 10 a.m. on a Thursday, a group of teens with North Star Community Rowing were on the Mississippi River.

"Before I joined this, I didn’t work out that much,” says 18-year-old Austen Harris. "I sat on the couch all day."

North Star’s main goal is to expand the sport to people it is typically offered to, including war veterans, adults with disabilities, and youth from under resourced communities.

Together, they continue to learn life lessons through both practices and trips to compete in regattas out of state. Often those visits double as opportunities to tour college campuses, meet other competitive rowers, and build community within the small team.

North Star’s main goal is to expand the sport to people it is typically offered to, including war veterans, adults with disabilities, and youth from under-resourced communities.

But with a  reputation as an exclusive, expensive, privileged sport very few others rowers step into practice waters similar to like those along north Minneapolis shoreline, or walk around broken glass with every launch.

"As you can see that water is not at all clean, it’s slimy,” says Pettiford. "That’s a large part of the reason the non-profit just signed a lease to build a walkway and dock on the south side of the Upper Harbor Terminal Development."

"It’s really for the whole community to have that dock,” says Anne Hinrich, board member for North Star Community Rowing. "It is the only place, it would be the first place that if you use a wheelchair that you could access the Mississippi River."

The rowing group needs $43,000 to make the launch happen. This weekend, a local film premier of "A Most Beautiful Thing" doubles a fundraiser. The chronicle of the first all-black rowing team out of Chicago also served as the inspiration to start North Star Community Rowing five years ago.

"It teaches you, you can be different," says Warfield-Johnson. "You don’t have to be like everyone else. You can stand out."

Now, the rowers of North Star hope their own wiliness to venture out into unfamiliar waters will also inspire others to do the same.

"It almost brings me to tears to think about that. If it weren’t for North Star, I don’t know of any other outlet that would take us,” says adaptive rower Greg Torp.

The fundraiser and drive-in movie premiere is already sold out, but if you are interested in donating or getting involved with the club, you can click here.