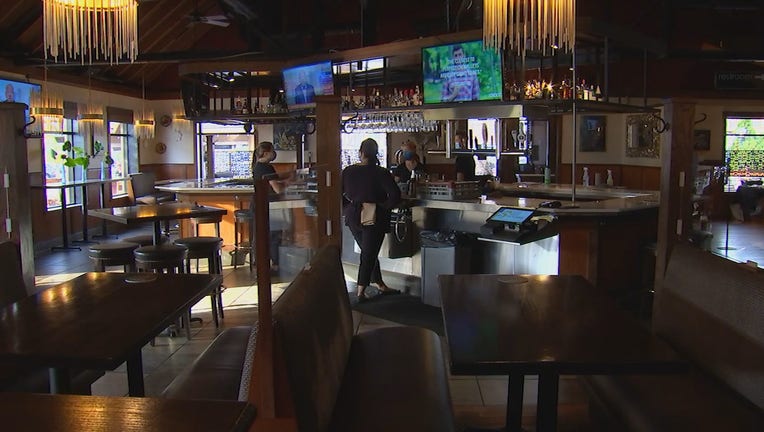 A Hudson, Wis. bar was taken by surprise by a new executive order from the Governor Tuesday that will restrict how many people can be inside the business as COVID-19 cases surge statewide.

HUDSON, Wis. (FOX 9) - Gov. Tony Evers’ decision to limit public indoor gatherings came as a surprise to restaurant owners in Western Wisconsin Tuesday, including one restaurant who found out about the news when FOX 9 called them.

The new restriction, which goes into effect at 8 a.m. Thursday, leaves restaurants and bars to readjust to new rules once again.

The new capacity restriction, which goes into effect at 8 a.m. Thursday, leaves restaurants and bars to readjust to new rules once again.

The new emergency order will drastically reduce the number of people allowed to gather in indoor public spaces to 25 percent of maximum capacity starting Thursday morning and going through Nov. 6.

Wisconsin is a COVID-19 hot spot, with the third highest number of new cases in the past four weeks in the entire country.

“We’re going to have to run some numbers and determine if it’s a better situation just to shut the three restaurants down until something changes,” said Pete Foster, of Baker’s Bar and Grill and San Pedro Café and Pedro’s del Este.

Some restaurant owners are wondering why there is a blanket rule for the entire state.

“We definitely need to get things under control in the state of Wisconsin,” said Foster. “I’m not arguing that at all, but over here on the west side of the state, I think we’re doing a good job.”

The hot spots are predominantly in the northeast part of the state, but on the west side, including St. Croix County, cases tend to be much lower. St. Croix has a case rate of 22 per 100,000 residents in the past two weeks, a far cry from Brown County which has a rate of 81 per 100,000.

St. Croix County Public Health officials say they are not in the clear, however.

Restaurant owners just want to make sure all factors are considered.

“I think there’s a balance there and I hope the people at the state level are making those considerations when they make decisions like this,” said Foster.

Childcare centers, churches, colleges and universities are among the exceptions to the new restriction.

State officials hope people will comply on their own, but fines of up to $500 could be issued if places are not.