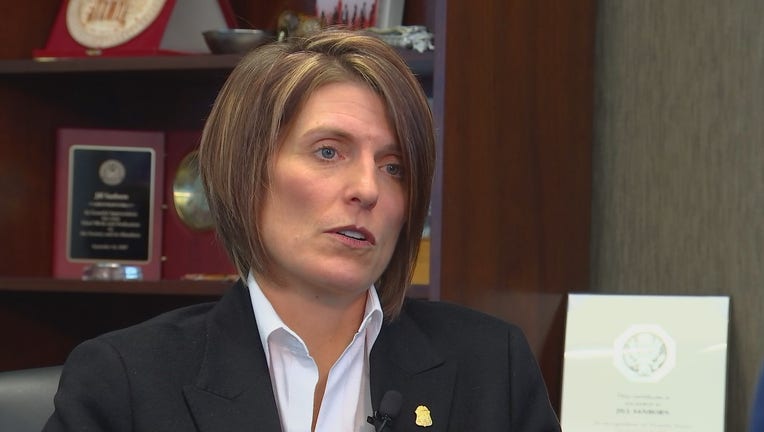 Jill Sanborn is taking over a top post at the FBI after a career in Minnesota.

(FOX 9) - The region’s top FBI official is wrapping up her stay in Minnesota and will soon head to Washington, D.C. for a big promotion.

Jill Sanborn, who spent the last couple years overseeing the bureau’s Minneapolis field office, has been named Assistant Director of the FBI’s Counter-Terrorism Division at its headquarters.

Paul Blume recently spent some time with Sanborn as she reflected on her accomplishments in Minnesota and looked forward to the challenges of continuing to protect America in her new role. She said whether it's tensions in Iran or impeachment on Capitol Hill, she is laser-focused on the mission.

“My job and my role - and I would say most FBI employees feel this way - is we all took an oath to protect America, the American people and defend the constitution. And whatever is going on around the world, that’s just what we are going to do. We are going to go after people who commit crimes and we are going to do what we can by absorbing intelligence to protect America. Most of what is happening doesn’t affect our job and our commitment to doing that,” she said. “I really eat and bleed terrorism. I have hyper-focused my career since 9-11 on the terrorism mission and trying to make sure what happened back then never happens again in this country.”

Sanborn will soon become the first woman to head up the FBI’s Counter-Terrorism Division. Her promotion from special agent in charge of the FBI’s Minneapolis field office comes at a time of great uncertainty across the globe, particularly the Middle East.

For the last 22 months or so, Sanborn, a native of Montana and a daughter of an Olympic downhill skier, has become a familiar face in the community. Her two dogs, Duke and Max, are always close by for comfort in her high pressure career. And the stakes are only rising with this promotion.

At the bureau’s Brooklyn Center office complex, Sanborn has overseen federal law enforcement operations across Minnesota and the Dakotas.

“I will definitely miss walking these halls.”

She’s particularly proud of the FBI’s efforts cracking down on crime on the region’s Indian reservations and singles out the establishment and strengthening of partnerships with local law enforcement. That includes in St. Paul where the FBI is teaming up with police and other agencies to reduce the city’s gun violence.

“We’ve worked really closely with them to try to decrease the violence, and I think we have seen a decrease in the last 30-45 days, but that could just be irrelevant to our efforts. We’re trying really hard to figure out who is behind it, what is the reason for the increase?”

Sanborn probably made her most headlines in September 2018 for a case that has nothing to do with either the loss of life or threat of terrorism but magnifies the variety of operations and investigations undertaken by the bureau.

That’s when Sanborn announced the FBI had recovered Dorothy’s long lost ruby red slippers from “The Wizard of Oz.” The historic Hollywood footwear - now worth millions - was snatched from actress Judy Garland’s museum in Grand Rapids years ago.

“Not only were these slippers stolen, but memories of lots of Americans were stolen back in 2005. We hope today we can give those memories back,” Sanborn said in the 2018 news conference.

As she heads to Washington, Sanborn explained that while the case remains active, there have been no arrests.

“The case agent is completely dedicated on that and constantly making progress, but we’re still not at a point where there’s any more I can tell you beyond the press conference… still trying to get to the bottom of it.”

Sanborn insists she is leaving the local field office in great shape, and while she will soon have oversight of the nation’s most pressing terror threats, Sanborn said her number one concern remains the lone actor with deadly motivations.

“Why I think that is so important and probably our biggest challenge is the ability for folks with the internet and social media to sit in their house and become radicalized - whatever that ideology might be, whether international flavor or domestic flavor, become more radicalized - and figure out a way to mobilize...buy things on Amazon and have it shipped to their house, and go out and do something before red flags rise to law enforcement is what concerns me the most in the terrorism space.”

Sanborn added that we all have a role in protecting our communities, knowing when something isn’t adding up and alerting law enforcement.

Sanborn is set to leave Minnesota on February 7 and start her new role at FBI headquarters soon after.