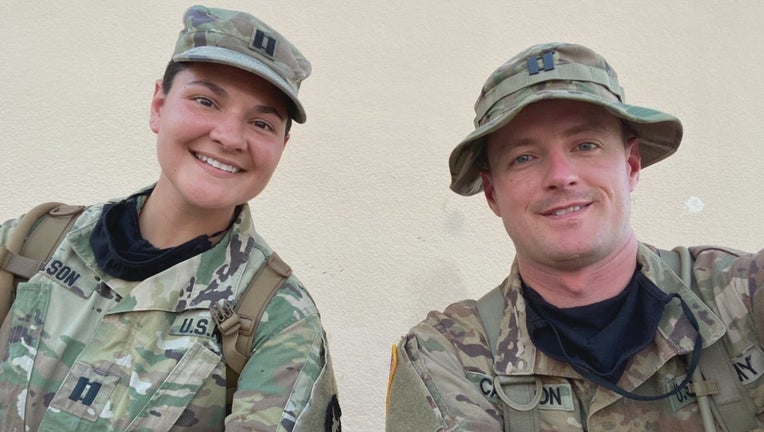 Jordan and Chloee Carlson of Plymouth, Minnesota both serve in the Minnesota Army National Guard and are preparing for a deployment to the Middle East. (The Carlsons)

PLYMOUTH, Minn. (FOX 9) - The military can take you many places and for Jordan and Chloee Carlson of Plymouth, Minnesota, it’s taking them overseas.

"This is the first time we're actually going to be deploying on the same timeline in the same unit," said Chloee Carlson, a military intelligence officer for the Minnesota Army National Guard.

The military can take you many places and for Jordan and Chloee Carlson of Plymouth, Minnesota, it’s taking them overseas.

That means this married couple has a lot to do before they leave.

"Our pets are at my sister's and my plants are at my mom's and we’re just really thankful for the network of support we have," said Chloee.

Both serve in the Minnesota Army National Guard and their unit has been called up, along with about 1,100 other soldiers who leave this weekend as a part of Operation Spartan Shield.

"Basically it's a reassurance to a lot of partner nations in the Middle East and to Kuwait we're really there to be an emergency reaction force," said Jordan Carlson, an infantry officer and company commander.

The couple has been vaccinated, but will still have to stick to strict COVID-19 protocols overseas, including 14-day quarantines and COVID-19 testing.

"It will be hard seeing states opening up and we'll be stuck in the desert, wearing our masks not out on the lake," said Jordan. "That will be tough."

While this deployment had been in the works for a while, there's been plenty of unplanned assignments for the Minnesota National Guard recently from assisting with COVID-19 testing and helping with vaccine shipments to assisting law enforcement during the unrest last summer.

"It was very surreal and something I never thought would be in the realm of possibilities," said Jordan.

However, they're trained for the unexpected and say they'll continue to put on the uniform, for whatever job that’s needed.

"Working through that mental difficulty of having to leave and go, it;s hard and it;s hard for all of us, but it’s the call to serve," said Jordan.

The soldiers will have about two months of training in Texas before heading to Kuwait. They will be stationed there and in the Middle East for nine months.