It’s been more than 30 years since a nuclear reactor melted down and exploded at the Chernobyl Nuclear Power Plant and now a Minnesota company is helping cleanup the worst nuclear disaster in history.

SHOREVIEW, Minn. (FOX 9) - It’s been more than 30 years since a nuclear reactor melted down and exploded at the Chernobyl Nuclear Power Plant and now a Minnesota company is helping cleanup the worst nuclear disaster in history.

The Chernobyl accident happened on April 26, 1986. A safety test went terribly wrong at the Soviet Union power plant, and one of its four reactors exploded and caught fire.

The blast spewed 400 times the radioactive material than the atomic bombings of Hiroshima and Nagasaki combined into the atmosphere over Russia and Western Europe. It killed two reactor operators immediately while 42 firefighters and plant staff died in the days, months and years that followed from acute radiation poisoning and cancer.

It was the worst nuclear disaster in history.

More than three decades later and half a world away, a Minnesota company built a special crane to help clean up the radioactive material at Chernobyl.

The company is Par Systems, and the crane is the first of its kind and the only one in existence.

It has a remote controlled robotic arm suspended by six guide wires that will pick up and carry tools and other items.

“It’s funny how that happened and how a company in Minnesota ended up with it, but we have a long history of working with nuclear power and the labs that do nuclear work,” said Rob Owen, of Par Systems.

Immediately following the nuclear meltdown, the Soviets built a makeshift metal structure around the reactor that exploded called the Sarcophagus, to keep more radioactive material from getting out. It was only supposed to last 30 years and was in danger of crumbling, which could have caused another tragedy.

A group of countries, including the United States, helped pay for a $1.6 billion steel arch to cover the Sarcophagus for the next 100 years. 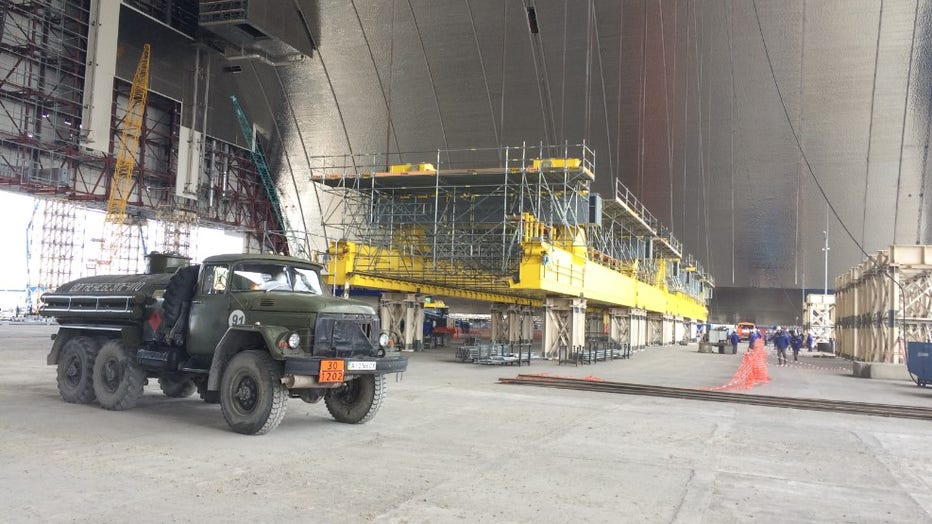 This crane was designed in Shoreview, Minn. and is being used as part of the Chernobyl Megatomb.

Since the reactor is still radioactive, the Megatomb had to be built 300 yards away and slid into place in November 2016, making it the largest structure ever moved on land.

All of TCF Bank Stadium could fit inside of it.

Inside the arch, two Par Systems cranes the length of football fields that can lift up to 50 tons will help demolish the Sarcophagus and eventually remove the radioactive rods and other dangerous materials that are still in and around the site.

“Our equipment is the tip of the spear to go in and dismantle the destroyed reactor and the building around it,” Owen said. “It feels really good to be a part of taking care of the immediate problem which is Chernobyl being exposed to the elements.”

As part of his duties for Par Systems, Owen traveled to Chernobyl, which is now part of Ukraine, a handful of times.

He says the environment is similar to Minnesota and he saw the abandoned city of Pripyat and the exclusion zone, which is the 19-mile area around the plant where nearly 120,000 people were forced from their homes. 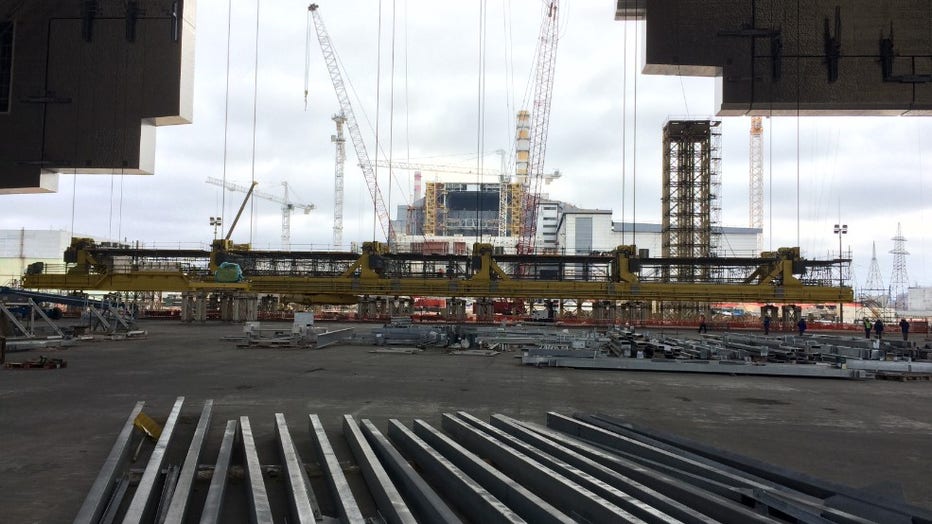 This crane, designed in Minnesota, is being used in Ukraine and was installed as part of the Chernobyl Megatomb.

"Driving through there was a little interesting and somewhat sad because you'd see these abandoned farms and abandoned homes. You'd see trees were growing right through barns and houses and falling on them. But we saw a lot of wildlife there. We saw these Siberian horses they brought in to kind of test how animals would do. There's wolves, deer, they call them elk, but there are moose,” Owen recalled.

Owen says one of the engineers on the project was even working at Chernobyl as a young man on the night of the accident.

“They had him stay back in the operation center. He wasn’t on unit four. A lot of guys went to fight the fire. They got the most exposure from the accident. He didn’t talk about it a lot, but he was a very careful engineer and made sure all our equipment was designed properly. He was very safety-oriented,” Owen said.

With an HBO miniseries chronicling the events that led up to the accident and its aftermath, Owen says the 33-year-old disaster is back in the public consciousness.

“Everyone is interested in it when they find out I worked on Chernobyl, especially people my age who remember when the accident happened,” Owen said.

Helping put the ghosts of Chernobyl to rest for future generations is one of the highlights of his career.

“There are a lot of companies in Minnesota who work all over the world; even here in humble Shoreview, Minnesota, we can have an impact globally,” he said.

Since the Megatomb was moved into place, Par Systems says it has been testing their equipment and is in the process of basically turning over the keys to the project.

The company says it will now be up to Ukranian government to use the cranes to begin the long process of cleaning up the catastrophe.