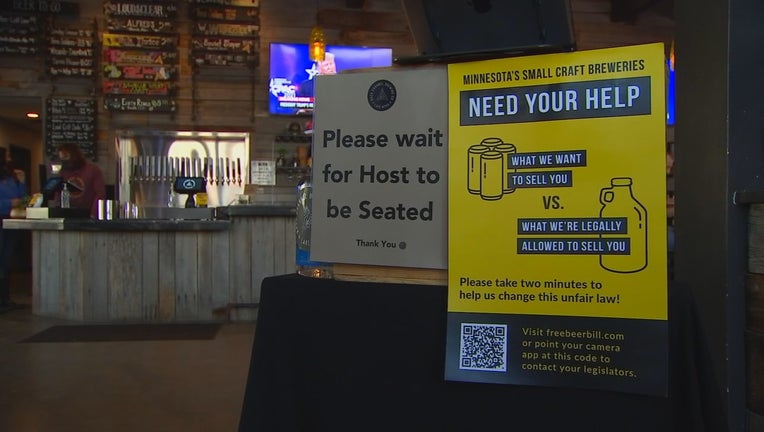 Breweries are limited from seller beer in smaller cans and containers under Minnesota law. (FOX 9)

(FOX 9) - Breweries across the state are coming together in hopes of changing the way beer is sold.

Brewery owners are making a push to change a state law they say is outdated, unfair, and stopping them from making more money -- all because they can sell beer in smaller sizes.

A coalition of Minnesota breweries are pushing for new legislation that would allow them to sell certain cans of beer from their taprooms. The bill would affect about 160 craft breweries in the state.

"We’re in a pandemic and we’re just trying to get some sort of relief," said Leddy. "Not in a form of money but in the form of being able to sell any vessel we want."

Current state laws prevent breweries from selling anything less than a crowler -- or about 25 ounces.

"Our laws are way outdated," said Leddy. "Prohibition started in Minnesota and it’s almost like we have to deal with old Prohibition laws and it’s not fair."

That’s why breweries like Leddy’s are teaming up together through the Small Craft Brewers Association in support of a bill making its way through the state House and Senate. If passed, the bill would allow them to sell beer in smaller amounts.

"This coalition is centered around small breweries that are under 7,500 barrels," said Copper Trail Brewery co-owner Adam Graf. "And our goal is to sell pretty much any package size between 12 ounces and 64 ounces."

Mandatory shutdowns due to the pandemic hurt many breweries that were limited to takeout only. Brewery owners say the passing of this bill would be a game-changer.

"We’re also able to more efficiently produce those, too," said Copper Trail co-owner Dave Gibbons. "So, why should we only be able to offer the things we're not able to do efficiently. As a small business, this is going to be able to help us stay on our feet especially during these rough times."