MINNEAPOLIS (FOX 9) - While the rate of carjackings in Minneapolis has dropped in recent weeks, the city remains on pace for yet another record-breaking year.

Overall, carjackings have declined from the city’s record peak in November 2021. 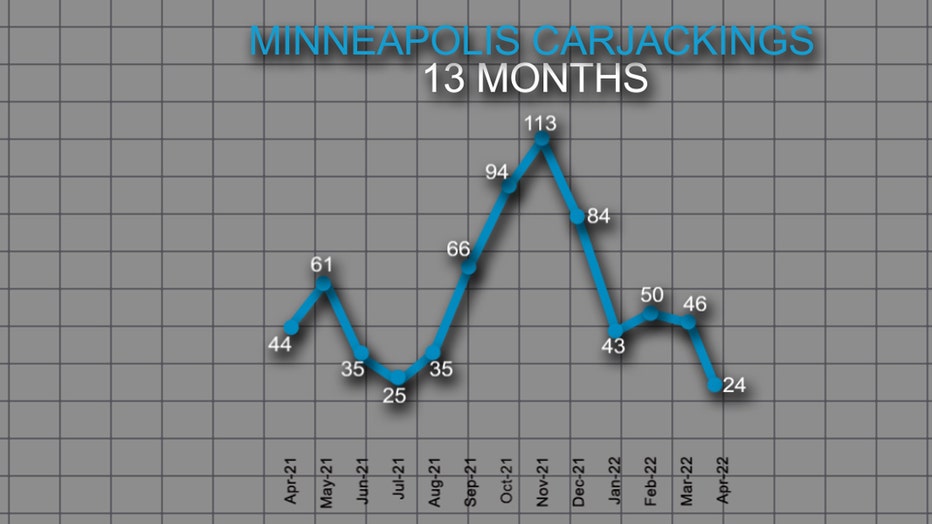 However, Minneapolis remains on track to outpace previous years. 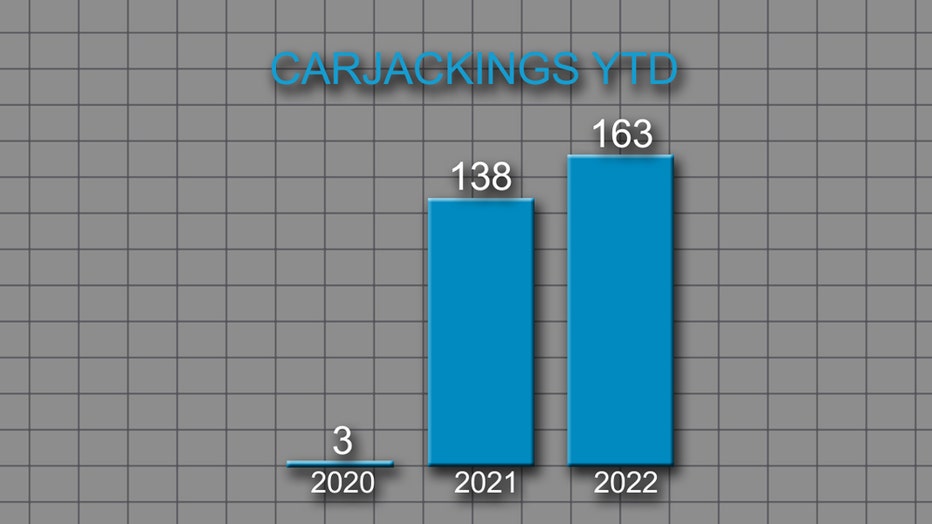 The FOX 9 Investigators analyzed years of court records, police evidence, case files and video of carjacking cases in Minneapolis, which revealed carjackings never-before-seen by the public.

One of the most chilling examples involved a carjacking where a young child girl was caught in the middle.

Surveillance video obtained by the FOX 9 Investigators show Antonio DeLeon wandering the streets near a Raising Canes restaurant in the summer of 2020. The driver of a white Buick was inside the restaurant picking up food and the time.

According to police records, the driver’s "daughter has Cerebral Palsy and can’t walk so she left her in the car with the air on."

The video shows DeLeon appearing to notice the car running, hops in, and drives off with the child still inside.

DeLeon pulls over a few blocks away and dumps the girl on the sidewalk, where she struggled to craw to a bystander for help.

After seven grueling minutes, the mother is reunited with her daughter who was unharmed.

Over the course of one week in the summer of 2020, a man stole two vehicles in Minneapolis while there were children in the back seat. The first incident was caught on surveillance video.

The FOX 9 Investigators shared video of the carjacking with Minneapolis Mayor Jacob Frey.

"They’re horrible. They’re unacceptable. People should not need to go through that kind of trauma," Frey said.

Last year saw a record number of carjackings with more than 600 cases reported in the City of Minneapolis alone.

"It’s definitely not a place that I feel comfortable raising my children right now," said one woman whose family was carjacked at their home. I know that they don’t feel safe."

"I can’t look at those 650 people and say ‘yeah, it’s safe here’ because they have experienced a horrible crime. And so I’m mindful for those who experience this crime. It’s serious, it’s traumatic and we as a department take that very seriously," Parten said. "I can also say that the vast majority of citizens, employees and those who visit the city don’t experience crime."

RELATED: No easy answers in debate on how to deal with repeat juvenile offenders in carjacking cases

Carjacking cases can be especially complicated with carjackers crossing city boundaries and jurisdictions.

More complex and organized carjacking rings have surfaced over time.

In the summer of 2021, MPD launched a "carjacking workgroup" made up of internal robbery investigators, juvenile justice investigators, federal agencies and prosecutors.

"This group comes together and ensures that all of those crimes that are associated with that individual or with that group are being investigated in the best possible way and linking all those individuals and bringing that as a complete package to those prosecutors so that we can see the best outcome in regard to holding them accountable," Parten said.

One ongoing investigation focuses on an apparent crime ring that’s targeted rideshare drivers since 2021. A recent search warrant seeks data and information from Uber on potential suspects after identifying 71 violent crimes tied to the group.

MPD says arrests, prosecutions, and a drop in carjackings are all metrics the department uses to identify success in tackling the problem.

However, a recent FOX 9 Investigators analysis of 2021 police data revealed as many as 90% of carjacking cases in Minneapolis went unsolved.

"Carjacking occurs in a matter of seconds," said Parten, adding later: "And while it can happen in just a few seconds, over time we are able in a lot of cases to develop evidence and information, identify people, link them to other groups and bring charges against cases."

"There's really no one single metric that we're going to be using here. It's prevention beforehand. It's prosecution after the fact, and of course, it’s diversion," Frey said.

That could perhaps include intervening with carjackers like DeLeon – the man ultimately caught and convicted in that gut-wrenching carjacking involving the young girl. At the time of that crime, DeLeon was out on bond on a separate car theft from a few months prior.

What's Driving The Decline in Carjackings?

The sheer number of carjackings in Minneapolis has seen a steep decline since the November 2021 peak. However, at this point, it’s unclear what’s driving the drop.

When asked whether MPD’s efforts could be credited with the decline, Officer Parten conceded: "Unfortunately, it’s too early to tell."

"We will constantly reevaluate – what are we doing? Where are we at? How is it working? And if it’s not, what are we going to do to make sure that it does work?"

Editor's note: This story was updated to reflect the fact that the City of Minneapolis began tracking carjackings in September 2020.