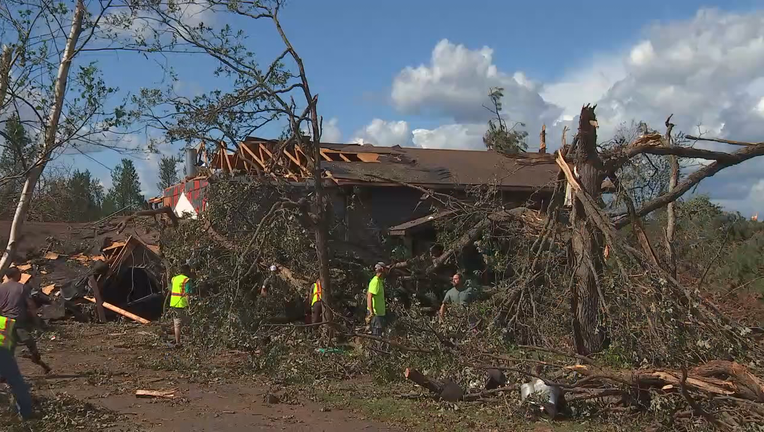 (FOX 9) - Nearly a week after an EF-3 tornado tore a five-mile path through western Wisconsin, hundreds of volunteers have made a giant impact in rebuilding the area.

On day six, it’s still a small army of people who just want to help. Though they’re ahead of where they thought they’d be, there’s still a long way to go.

Despite a long road ahead, volunteers are making good progress cleaning up after a tornado tore through western Wisconsin.

“I saw it on TV and thought, ‘hey they’re looking for help, they’re asking for volunteers,’ so we came out,” said volunteer Dan Frank.

In less than a week, it’s really added up.

Dan Frank and Charlie Martens, both from Chippewa Falls, said they’re amazed to see so many people involved. In fact, it’s reached between 300-500 volunteers per day.

"They just came from all over the place…a guy came from 2 1/2 hours away, and he’s probably 80 years old and he just busted it all day,” Frank said.

As part of the clean-up, the debris is collected from homes and farms - picked up from in yards and farm fields – and loaded into rollaway dumpsters.

“I know just on Saturday from just the north side of 29, we hauled about 10 40-yard dumpsters of debris just from the farm fields,” said Adam Blaskowski, Chief of the Wheaton Fire Department.

The tree debris is now a huge pile by the fire station, with 600 dump trucks just on the first day. A shredder stays running all day long.

“We have volunteers thanking us for allowing them to come. They can’t imagine what they’re doing for us,” Blaskowski said.

While there’s months of work left and years of recovery, about a quarter of the clean-up is already done.

“I’m amazed,” Frank said. “But, all the volunteers, you get hundreds of people out here, get a lot done.”