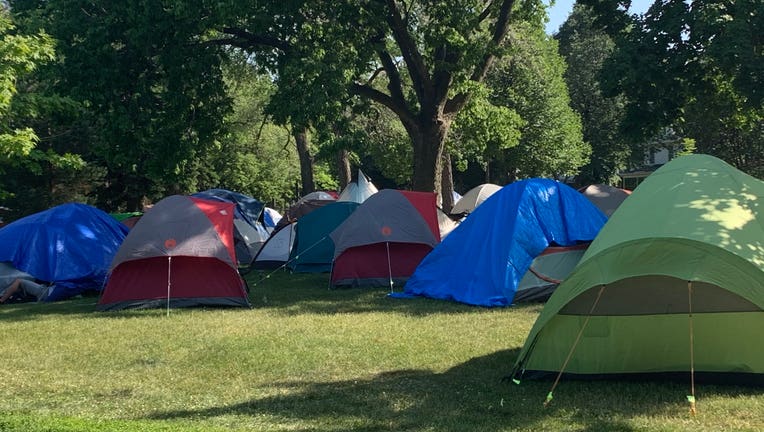 An encampment is growing at Powderhorn Park in Minneapolis.

MINNEAPOLIS (FOX 9) - There have now been three sexual assaults reported at the Powderhorn Park tent encampment in Minneapolis, two of which involved juvenile victims.

Tents started popping up in Powderhorn Park around June 10 after hundreds of people experiencing homelessness were evicted from the former Midtown Sheraton Hotel. The encampment has continued to grow since then.

The most recent sexual assault occurred on Saturday. Minneapolis Park Police say a young girl was sexually assaulted by a man at the encampment.

Police say a Metro Transit squad was flagged down on a call involving the victim and suspect Sunday afternoon. After further questioning, the victim reported the sexual assault.

The suspect is in custody.

Shortly after 2 a.m. on Sunday, June 28, Minneapolis Park Police say there was a 911 report of a sexual assault of a woman at Powderhorn Park.

Officers with the Minneapolis Police Department located the suspect and arrested him near the park.

The incident is under investigation.

A juvenile was sexually assaulted at Powderhorn Park overnight on Friday, June 26.

According to the Minneapolis Park Police, officers were notified by Abbott Northwestern Hospital early Friday morning that a juvenile victim was sexually assaulted at the park sometime between 11 p.m. Thursday and 1 a.m. on Friday.

Individuals from the park brought the victim to the hospital. The victim as released to social services following medical treatment.