It has been six days since tents first popped up at Powderhorn Park and neighbors say not much has changed.

MINNEAPOLIS (FOX 9) - It has been six days since tents first popped up at Powderhorn Park and neighbors say not much has changed. At a meeting Tuesday night, the community called for a long-term solution from city, county and legislative leaders.

“We have a total of maybe 60 people that came within the last two days and it expanded with so many people we’re finding it hard to keep control and watch everybody,” said Michelle Smith, a community advocate for Homeless Outreach.

A homeless encampment that started on the west side of Powderhorn Park last week has now grown to the east side as well. 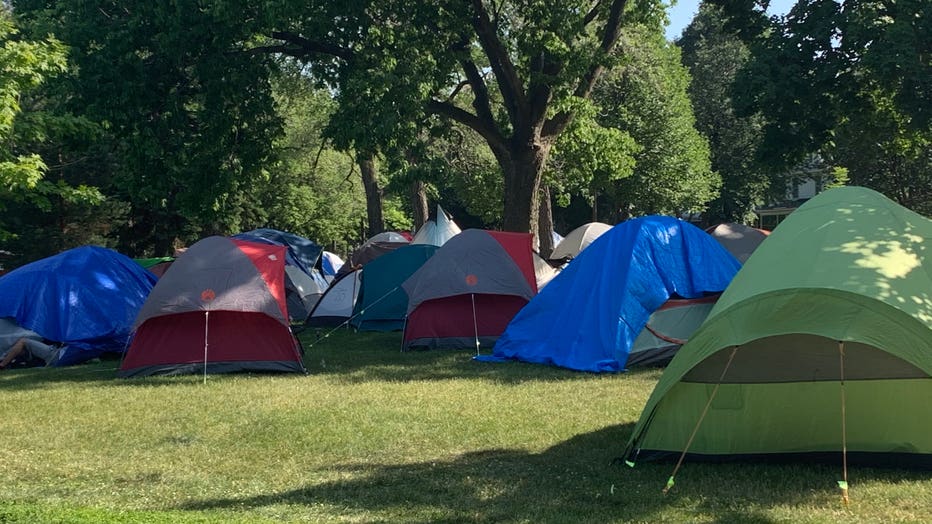 An encampment is growing at Powderhorn Park in Minneapolis.

Some are coming after being evicted from the Midtown Sheraton Hotel, others have learned by word of mouth. While there have been some portable toilets and hand washing stations added to the camps, it’s not a long-term solution.

“Housing is a human right. We demand to know our elected officials response to the humanitarian situation in Powderhorn Park and seek a solution immediately,” said Lily Lamb, a Powderhorn Park resident.

Tonight, a public meeting organized by Powderhorn Park neighbors saying they stand with those at the encampment, but are calling for help and more stable housing.

“We know our elected and appointed leaders are trying to work as hard as possible and guess what we need to them to work harder,” said Tabitha Montgomery, of the Powderhorn Park Neighborhood Association.

Some expressed concerns about safety in the park and advocates say something needs to be done soon to get people to more long-term shelter.

Neighbors urged fellow neighbors to push elected officials to respond by contacting them for answers.

The city of Minneapolis says it has been actively involved in discussions with Parks and Rec, Hennepin County and state folks as well as street teams to figure out some solutions and are also working to get more hand washing stations.

Hennepin County says there is currently space at county shelters that are available at this time. At the state level, the Governor has asked the legislature for $360 million for affordable housing, including those experiencing homelessness.