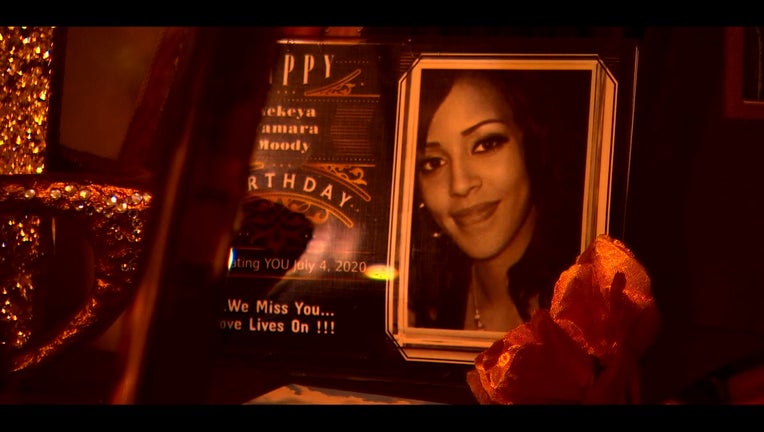 Nekeya Moody died after being restrained by Ramsey County deputies in February 2020. (FOX 9)

(FOX 9) - It was not the first time law enforcement was called to help Nekeya Moody during a mental health crisis, but it would be the last.

During a struggle with Ramsey County deputies one year ago, Feb. 6, 2020, Moody was handcuffed as deputies pinned her on her stomach. Within seconds she stopped resisting and was unresponsive, but she was kept in that position for two more minutes.

It was not the first time law enforcement was called to help Nekeya Moody during a mental health crisis, but it would be the last.

As the deputies struggled to find a pulse, they speculated she was "playing possum." A theory the deputies relayed to paramedics when they arrived and stood over her unconscious body for a couple more minutes, before providing medical aid.

In the ambulance, Moody would go into full cardiac arrest. She was taken off life-support and died at Regions Hospital four days later.

Moody was 37. She had five children.

For Moody’s family, the deadly encounter, captured on the deputies’ body cameras, was strikingly similar to what happened to George Floyd four months later.

"As soon as I saw George Floyd it reminded me of my sister right away," said Patriece Standberry, Moody's sister.

"They’re trying to kill me"

The Ramsey County Sheriff’s Office provided Moody’s family with video from the police body camera. The family is shared it with the FOX 9 Investigators because they believe the public needs to see the disturbing encounter.

According to police reports, at 7:46pm the two deputies arrived at a home in Little Canada on a medical call for someone having a seizure or a panic attack.

FOX 9 is not identifying the deputies because they have not been accused of wrong-doing or disciplined.

As the deputies approach the door you can hear a woman screaming from inside.

"Thank you, officer, here she is," says the homeowner, who was Moody’s friend.

Deputies enter the home and a chaotic scene. Moody is sitting on the floor, her back to a friend who is holding Moody in a bear hug against a couch.

The deputy replies, "No, we’re not going to do anything like that. What’s going on today?"

Moody begins screaming, "They’re trying to kill me. My God, you guys are working with him."

Deputies struggle to handcuff Moody. She knocks off a body camera, and the deputy will later say she reached for his weapon.

After about 90 seconds deputies are able to place Moody on her stomach with her arms handcuffed behind her back.

But within seconds, Moody stops moving.

After two minutes, a deputy says, "Put her on her side, get her off her chest."

The deputy whispers, "I don’t know."

Seconds later the deputy says he found a pulse and paramedics, who have been waiting outside the home, are given the ‘all clear’ to enter.

"I don’t know if she’s playing possum," a deputy says to the paramedics.

As the paramedics stand around observing Moody it will be nearly two more minutes before they check her vitals.

It is only as they carry her out on a stretcher, a full seven minutes after she went limp, that the paramedics seem to realize there is a problem. "I think we may have an airway issue," an EMT says.

"Clearly she needed help," said Standberry, Moody’s sister. "But the way they jumped on her and put her on the ground was excessive and just plain wrong."

"It just didn’t make sense that a healthy woman would die like that, with no preconditions."

When All Else Fails: Excited Delirium

Excited delirium is the controversial medical diagnosis of someone who is hyper aggressive and psychotic due to drug intoxication and / or mental illness, causing an adrenaline overdose, a dopamine rush that leads to cardiac arrest and often death.

It’s the same condition Minneapolis Police officers speculate about during the killing of George Floyd. But the Hennepin County Medical Examiner ruled that Floyd died from positional asphyxia, as he was placed on his stomach, with a knee on his neck.

Death from excited delirium is not only controversial it’s also extremely rare.

The FOX 9 Investigators reviewed 260,091 death certificates in Minnesota in the last five years and found only three cases where excited delirium was a contributing cause of death.

Nekeya Moody was one of them.

Dr. Mills admitted excited delirium is a diagnosis when other possible causes of death have been ruled out, including positional asphyxia.

Dr. Mills said their office did review the body camera video, but didn’t find any medical evidence of positional asphyxia.

Nekeya Moody’s death was as complicated as her life.

St. Paul police had nearly a dozen contacts with Moody in the weeks leading up to her death.

Police reports obtained by the FOX 9 Investigators show Moody had been diagnosed with schizophrenia, bipolar, and PTSD. Moody was convinced people were trying to kill her.

In one report, two weeks before her death, an officer writes, "COAST has exhausted its ability to engage Moody in services."

Moody had become a familiar face at the psych unit at Regions Hospital, but was released because she wasn’t considered a danger to herself or others.

Ramsey County deputies were unaware of that history when they arrived at the door a year ago.

What kind of response?

"We need to take cops out of the business of responding to mental health calls," said Michelle Gross of Communities United Against Police Brutality.

Gross is currently working with Minneapolis Police on developing a response plan that does not involve police presence to most calls.

Gross believes police uniforms and weapons are an immediate trigger for those in a mental health crisis.

"They are not able to respond to police in a way they expect. Police will be making commands they don’t understand. And things escalate," said Gross.

He reviewed the video of Moody for the FOX 9 Investigators.

"My first impression, like a lot of people, is thinking ‘This isn’t going to go well,’" said Wickelgren.

"When the person goes from violent behavior and then suddenly goes quiet and calm, especially then unconscious, that’s a big warning sign for excited delirium," said Wickelgren.

The Moody case shows the limits of a mental health response with police, Wickelgren believes, because law enforcement needs to make sure the person isn’t a threat to themselves or someone else.

He said sometimes there is no time or opportunity to de-escalate, and officers are left with a no-win situation that becomes a matter of timing.

"I think it’s important to talk about what this case was, and what it is not," said Freeman.

In research published last year Freeman looked at 168 fatal cases of excited delirium where some kind of police restraint was used.

He found in every one of those cases, it’s more likely they actually died from positional asphyxia, caused by police choke holds or prone restraint.

But in the video of Moody, Dr. Freeman sees something else.  He believes Moody is having difficulty breathing before she is ever placed on her stomach.

"But that’s not a case where there is some overt negligent act that killed her.  At least from what I can see," said Freeman.

But Dr. Freeman does see a cautionary lesson: As soon as a suspect is handcuffed, they should be placed on their side, or sitting upright.

"You roll them on their side or sit them up once you cuff them. It reduces any kind of asphyxia," warned Freeman.

For Moody’s sister, that is the lesson at a minimum.

"They should not have had her on her stomach at all, because she was already panicking. Obviously having someone on top of you is going to make you panic more," said Standberry.

For her family there are so many scenarios where Nekeya doesn’t die, and she lives to see her five children.

"It’s going to be a long road ahead of us, but I think my family will get justice one day," said Standberry.

The Ramsey County Sheriff’s Office provided public records in this case, but declined opportunities to respond.

A spokesperson for Allina, which runs the ambulance service, said privacy laws prevent them from commenting on Moody’s care.