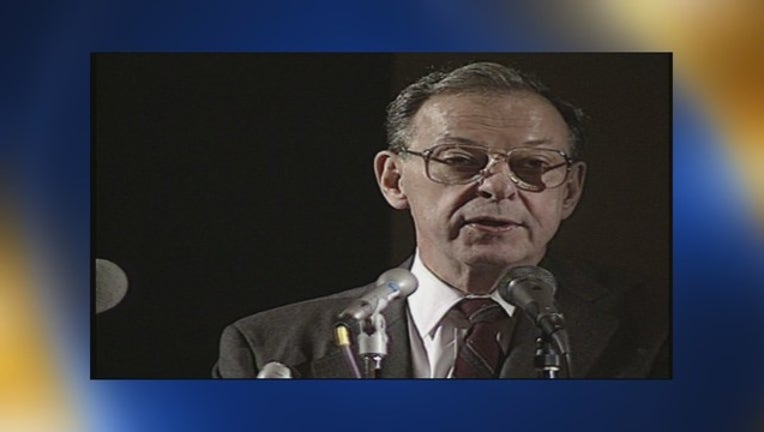 (AP) - Former U.S. Rep. Don Fraser, who lent his name to the commission that democratized the Democratic Party's nominating process and later became Minneapolis' longest-serving mayor, has died. He was 95.

Fraser died Sunday at his Minneapolis home, less than a year after the death of his wife, women's rights leader Arvonne Fraser, son Tom Fraser said.

Don Fraser served seven years in the state Senate before being elected to Congress in 1962, There, he led an investigation into South Korea's attempts to sway U.S. policy. He also led a commission that changed the party's nominating structure after the 1968 Democratic National Convention in which Hubert Humphrey was nominated for president even though he hadn't won a single primary. The Commission on Party Structure and Delegate Selection, which became known as the McGovern-Fraser Commission, restructured the party's process of nominating presidential candidates to give more power to rank-and-file members.

After leaving Congress, Fraser served four terms as mayor of Minneapolis, from 1980 to 1994.

"He was a little shy and understated. He'd rather listen than talk. He had trouble remembering names and faces and he didn't like asking for money," Fraser said.

"He was a firm believer in the rule of law and was a very effective advocate for causes he believed in. He was a very thoughtful, scholarly guy who did his research. Even his political opponents respected him," said Fraser.

Donald MacKay Fraser was born in Minneapolis in 1924, earned two degrees from the University of Minnesota. An attorney, Fraser became active in the Democratic-Farmer-Labor Party in the 1940s and worked on several political campaigns, including Humphrey's 1948 bid for Senate.

Through his work in the party, he met Arvonne Skelton, whom he married in 1950, according to the Minnesota Historical Society's biography of him. The Frasers married in 1950, had six children and together became known as advocates for human rights and other progressive issues.

Tom Fraser told the Star Tribune last year that the family's house in Washington "became basically a hostel for the anti-war movement and women's rights." Arvonne Fraser died in August at the age of 92.

Aside from his elected offices, Fraser was a dedicated father to his six children, his son remembered. He canoed in the Boundary Waters Canoe Area of northern Minnesota with his family and as a politician worked to pass laws protecting the region.