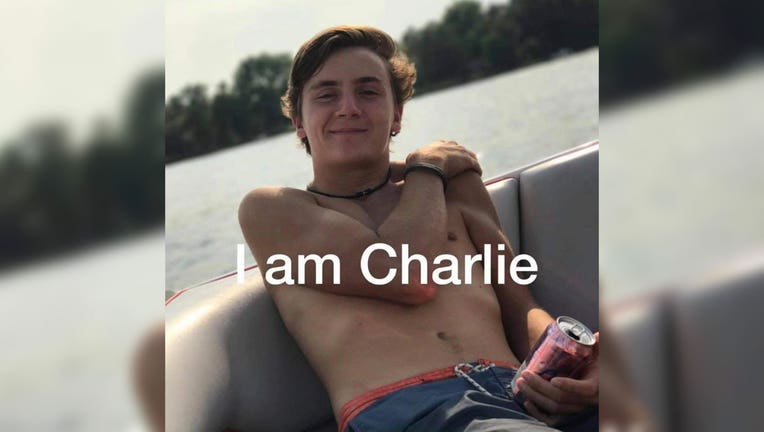 Charlie Johnson was shot and killed in downtown Minneapolis over the weekend. "I am Charlie" is a mantra being used by the family in solidarity to address hate and gun violence. Plus, it serves as a call to bring out the best in all of us and be like

(FOX 9) - The family of 21-year-old Charlie Johnson, who was shot and killed in downtown Minneapolis, is shattered.

They described the shock, disbelief and heartbreak they felt over the last 48 hours. Charlie’s father Greg Johnson says he lost his best friend.

The family of Charlie Johnson, who was shot and killed over the weekend in Minneapolis just days before his college graduation, described getting the news of his death and what the days since have left them feeling.

"From the time he was puny, anything that needed to be done - building, cutting grass - he would strap on the tool belt and grab a little plastic hammer and go help Dad. And that continued through life," Greg said.

Johnson, who loved all things outdoors, had become a man on the doorstep of the next phase in his life: college graduation.

Hours before he was set to receive his diploma from the University of St. Thomas in engineering, he became an innocent victim in an apparent gunfight on the streets of Minneapolis.

His family explained that he was trying to get an Uber ride out of downtown.

"We don’t know a lot of the details," said Greg. "When they heard the gunfire, Charlie’s friend yelled, ‘We gotta run, they’re shooting.’ They are running side-by-side, they try to turn the corner at the end of the block and, at that moment, Charlie went down and his friend was there to give him all the love and support he could."

Charlie was shot in the chest. One of the gunmen was also killed in the hail of bullets. Eight people were injured.

Charlie’s sister, a St. Thomas graduate herself, insisted she walk at graduation for her fallen brother. She accepted his diploma just hours later.

"I was thinking Charlie worked so hard for that. There were a lot of times he didn’t know if he would make it, and he’d call me worried and we’d talk about it and he would snap out of it and say, ‘You’re right. I got it.’ So he earned that," said Camille Johnson, his sister.

Monday, the Johnson family shared their anguish through an "I am Charlie" movement, hoping the way their son and brother lived his life motivates others to be better and to put the guns down.

"He was the best of each of us put into one," said Greg. "So, if we all could try to be a little more like Charlie, the world would be a better place."