BELGRADE, Minn. (FOX 9) - It appears a stabbing and hours-long standoff in central Minnesota was fueled by drugs and paranoia, a new criminal complaint details.

Christopher Allen Shepersky, age 35, of Deer Creek, Minnesota, is now facing charges after the standoff in Belgrade, Minnesota on Monday.

A Deer Creek man has been charged with second-degree assault after Belgrade, Minnesota standoff.

Police were called to the 100 block of Washburn Avenue just after 10 a.m. on Monday for the incident. The 911 caller, Shepersky's ex-wife, told police that Shepersky had called her and said he had stabbed a woman at a home in the City of Brooten, the charges state.

According to the complaint, Shepersky told his ex-wife he thought the woman might be dead. The ex-wife also told police that she thought Shepersky might be on drugs and was "delusional." Police say they were able to identify the victim and determined her address was on Washburn Avenue in the city of Belgrade -- not Brooten.

Along with the call, Shepersky's ex-wife also received photos from Shepersky. According to the complaint:

At the scene, police say they were able to make contact via phone with the victim and negotiate with Shepersky for her release. Covered in blood, she was taken by ambulance to the hospital for treatment. She is expected to survive her injuries, police say.

Speaking with police, the victim also said Shepersky had been using meth and said he was dating her friend. She said, overnight around 3 a.m., Shepersky became delusional, claiming he saw lights outside the home and thought they were police officers.

Thinking the victim had called the cops on him, the victim said in the charges that Shepersky grabbed two kitchen knives, a steak knife and a bread knife, and demanded the victim help her. 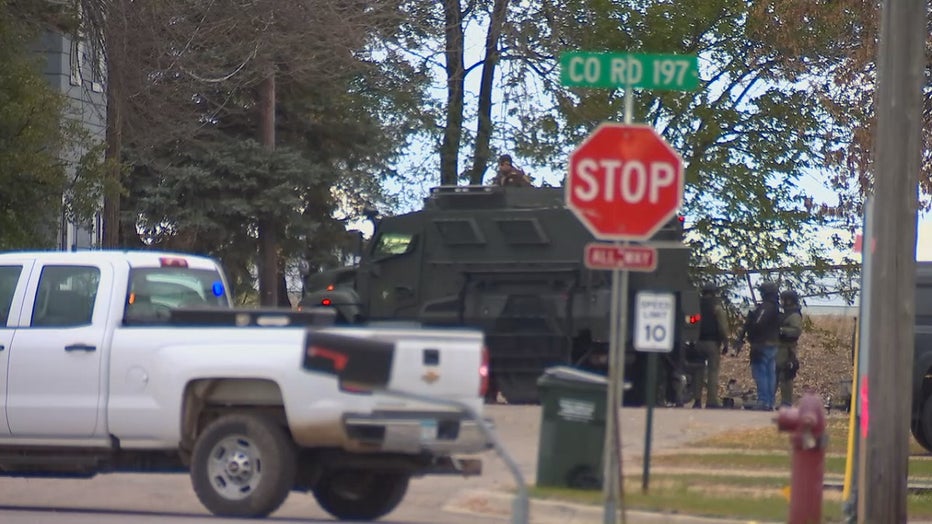 According to the charges, Shepersky held each knife up to the victim's neck at different times. Eventually, the charges state, the victim tried to get away and was stabbed in the ensuing struggle, including suffering a large cut to her hand. She was able to wrestle the knife away and told police she thought she stabbed Shepersky in the side.

The victim said she ultimately passed out from the loss of blood but later woke up around 6:30 a.m. When she tried to leave, prosecutors say Shepersky wouldn't let her. According to charges, Shepersky blamed her for calling the police and said he would use her as a "human shield."

After the victim was rescued, Shepersky remained in the home, refusing to come out for hours. At times, police say he was "extremely agitated" and shouted at officers.

Around 6 p.m., police were able to get him to leave the home and arrest him without incident. Speaking with police, the charges state Shepersky admitted to using meth. Inside the home, they found a large amount of blood throughout the home.

Shepersky is currently being held in Stearns County Jail on charges of assault, false imprisonment, and threats of violence.