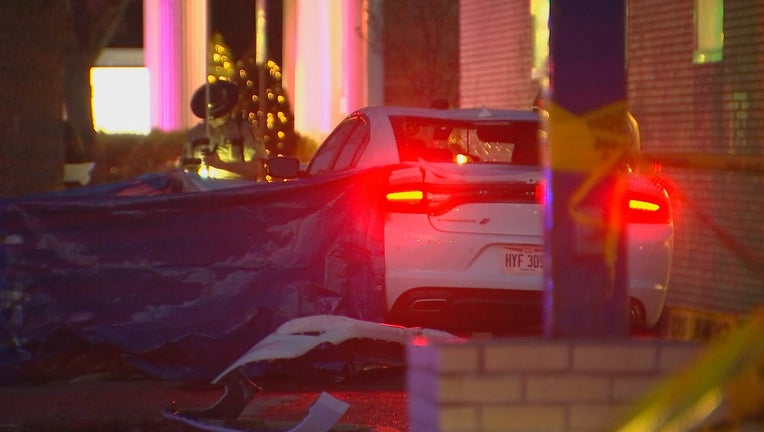 Hopkins police are investigating a fatal crash that killed a pedestrian at 15th Avenue and Mainstreet. (FOX 9)

(FOX 9) - A 28-year-old man has been charged in connection to a crash that killed a pedestrian Friday night in Hopkins, Minnesota.

According to the criminal complaint, Cole Venables, of Minnetonka, is charged with criminal vehicular homicide while under the influence of a controlled substance. At about 6:55 p.m., Hopkins police responded to a crash at 15th Avenue South and Mainstreet. When they arrived, they found a white Dodge Charger with heavy front-end damage. A woman was found partially underneath the vehicle and was declared dead at the scene.

Officers spoke with Venables who said he had been driving the car and fell asleep. He was wearing a shirt associated with a pizza restaurant and had a topper for the restaurant on his car, indicating he was a delivery driver.

A witness at the scene said she saw the car go up on the curb and strike a light pole before it ran over the woman on the sidewalk.

According to the complaint, Venables later told police he fell asleep while driving before he heard loud noises that woke him up. He admitted to taking Suboxone earlier that day and indicated he had a prescription. He also admitted that he had taken three or four "benzos" at about 4 a.m. before going to bed and another Xanax at the beginning of his shift that afternoon. He admitted he purchased those pills illegally.

He also said that before the accident, his manager tried to send him home from work early for being "too tired."

Venables is currently in custody.