The total number of illnesses is up from 380 a week ago.

NEW YORK (AP) - U.S. health officials say 530 people have now been diagnosed with vaping-related illnesses, but the cause remains unknown.

The Centers for Disease Control and Prevention on Thursday said confirmed and probable cases have been reported in 38 states and one U.S. territory. The total number of illnesses is up from 380 a week ago.

Seven deaths have been reported, the first of which occurred in Illinois late last month.

All patients had used an electronic cigarette or other vaping device. Doctors say the illnesses resemble an inhalation injury, with the lungs apparently reacting to a caustic substance. So far, no single vaping product or ingredient has been linked to the illnesses.

RELATED: Vaping affects blood vessels after one use – even with no nicotine, study says

Officials with the New York State Department of Health announced Sept. 5 that they were looking into vitamin E acetate as a potential cause of lung illness in vaping patients after investigators found “very high levels” of the substance in cannabis vape products that were submitted by patients for investigation.

While vitamin E acetate is harmless to people who ingest it as a dietary supplement or applied to the skin, the department is looking into the effects of the vitamin once it’s inhaled as vapor from an oil-like substance. 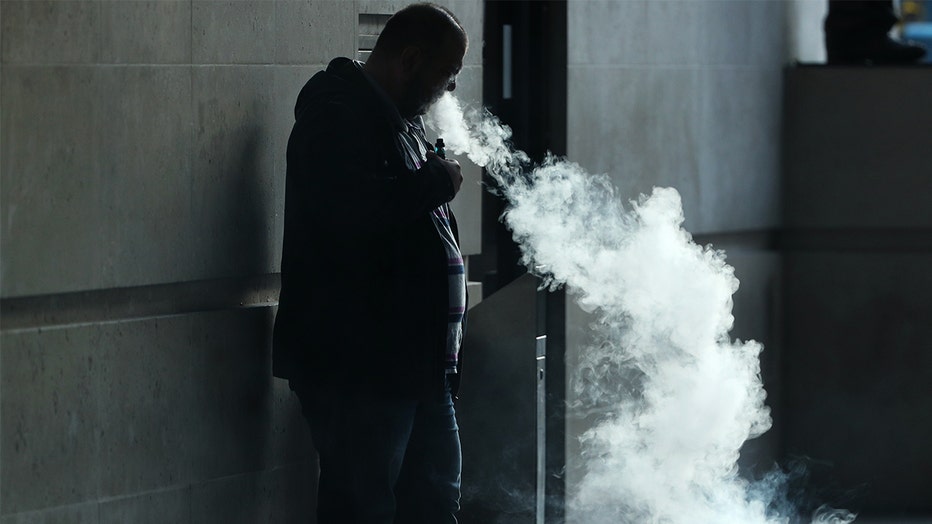 A man produces a vapor cloud while using an e-cigarette device. The CDC and FDA are now investigating more than 530 cases of lung illness related to vaping activity. (Yui Mok/PA Images via Getty Images)

Two-thirds of the cases involved adults between the ages of 18 and 35, and the majority are men.Some of the first cases appeared in April, and steady reports have been made to state and federal health officials since. Within the past week alone, a 19-year-old Indiana man made headlines after suffering two collapsed lungs, which his doctors believe was linked to vaping, as well as a mother of three from Abilene, Texas, who was diagnosed with acute respiratory distress syndrome (ARDS) and put into a medically induced coma. They spent 17 days and 24 days, respectively, in the hospital.

RELATED: ‘I didn't think it would happen to me': Doctors believe vaping caused teen's double-lung collapse

RELATED: Mom of 3 put into medically-induced coma with severe lung condition after vaping

The agency continues to work closely with the U.S. Food and Drug Administration (FDA) to test the substances in e-cigarette products used by case patients and to collect information about patients’ recent vaping.

As part of its investigation, the CDC activated its Emergency Operations Center (EOC) Monday, which will provide additional staff and operational support.

“CDC has made it a priority to find out what is causing this outbreak of e-cigarette or vaping-related injuries and deaths,” said CDC Director Robert Redfield, M.D. “Activation of CDC’s Emergency Operations Center allows us to enhance operations and provide additional support to CDC staff working to protect our Nation from this serious health threat.”

While its investigations continue, the CDC is urging people to avoid vaping altogether and recommends that anyone with a history of vaping who is experiencing lung injury symptoms should seek out medical care.