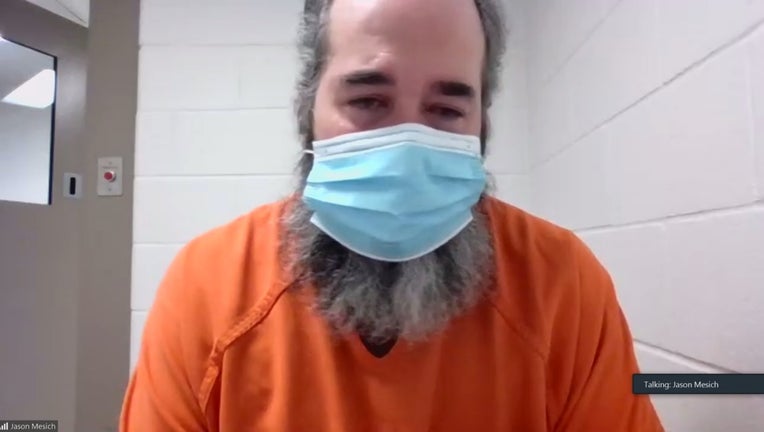 Jason Mesich appeared for his sentencing hearing over Zoom on March 15, 2021. (FOX 9)

BLOOMINGTON, Minn. (FOX 9) - A Bloomington man has been sentenced to more than 48 years in prison after pleading guilty to murdering his wife and shooting two of his neighbors last summer.

A Hennepin County District Court Judge sentenced 48-year-old Jason Mesich to a total of 583 months, which equals about 48.5 years. At least two-thirds of that time will be served in prison before he is eligible for supervised release, which at the earliest would happen when he's about 80 years old.

According to the criminal complaint, on Aug. 30 Mesich shot and killed his wife in their garage of their Bloomington home. After shooting his wife, Mesich went outside and shot a 12-year-old Makayla Saulter-Outlaw and her 29-year-old sister Canisha Saulter-Smith, who were loading items into a U-Haul truck at the time.

At Monday's sentencing hearing, which was held over Zoom, those close to the victims shared emotional statements, describing the impact the shooting has had on their lives. Mildred Saulter, the mother of Makayla and Canisha, described multiple triggers that cause her to relive the harrowing moments. Makayla was shot in the head, while Canisha was hit in the legs. Both survived the shooting.

"Every time I see a U-Haul, a pickup truck or even look at grass, I can picture my baby laying on the ground, cradling my granddaughter hoping they're ok, looking like she was dead," said Mildred.

Mildred said her daughters are still receiving treatment for their injuries and she continues to struggle with PTSD.

Mesich spoke briefly at the hearing, apologizing for the harm he caused.

"I'm truly sorry for my actions that night and I will live with it for the remainder of my life," said Mesich.